The Boysh Are Back In Town or... Fuzzy Memories 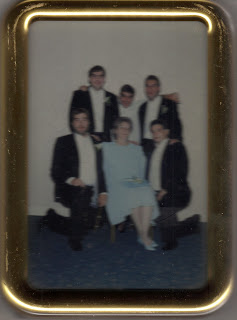 MDH has kicked it into high gear this week as he plots a pilgrimage with 3 of his 4 brothers to Las Vegas for the Superbowl.

Here is the plan as I understand it so far:

MDH will fly to Las Vegas next Thursday, along with his brothers Miami and Syracuse to meet with their other brother LV, who I normally refer to in this blog as Las Vegas, because I have named his brothers by location (which wasn't so smart in hindsight because what if one or more of them moves?) with the exception of his brother Knucklehead (because he is a knucklehead wherever he goes and Cambridge sounds way too educated and important sounding of a handle to give him). For the purposes clearing up any confusion in today's post brother Las Vegas will be referred to as LV.
Are you with me so far?

Where was I? Oh, yes, MDH and his slightly less knuckleheaded brothers are meeting in the city of Las Vegas next Thursday with the hopes that between the 4 of them someone will have been able to score Superbowl tickets. How this is supposed to happen, I haven't a clue. I assume it won't be above board, based on the thuggish character of his brothers, so I don't ask.

If the tickets are scored the group will (hopefully) sober up and rent a car with which to drive from Las Vegas to Tempe, AZ and attend the game.

If the tickets are not scored the group will remain hammered and watch the game together in one of their hotel suites or in the Caesar's Palace Sports Betting Lounge.

I have a feeling they will not make it to the game.

The last time they were all in Las Vegas MDH was having such a good time that he called me from what sounded like a combination of a Girl's Gone Wild video and a scene from Animal House and slurringly and lovingly asked if I minded if he stayed an extra day. He's a grown man, we have no children. What do I care? Go ahead my darling, stay an extra day. Party responsibly.

MDH: Otish Day n' the nights are playin and there'sh a toga party an Jenny McCarthy ish here n' Otish saysh for me to tell you "hi". (I had met some of the members of the band on a flight a few months prior and I'm sure they had no recollection of it.)

I could smell his scotchy breath through the phone from 2000 miles away.

Me: We can talk about it when you get home baby. Have a good time. I'm going to hang up now. Come home safe, OK?

Half an hour later I received a call from the American Express Fraud Department about an attempted suspicious cash withdrawal of $4000 on the card from an ATM machine at Caesar's Palace.

Half an hour after that I received a call from Visa's Fraud folks on the same topic for the same amount.

I told them both to deny the transactions because MDH is really happy and generous when polluted and probably trying to buy a round of drinks for the entire audience at Cirque Du Soleil, but there was also the possibility that he had had his pocket picked by Miami's "date" or been robbed at gunpoint.

Anyhoo... I think it's pretty obvious that I'm not a jealous type, but don't fuck with our bank account. So next weekend I'll be manning the phone here at home, ready to nix the crazy credit card cash withdrawals hoping like hell Otis Day & The Nights have a gig elsewhere.

Here is a sampling of the amazing photos MDH took at the toga party: 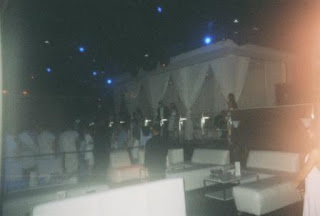 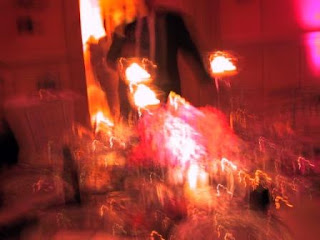 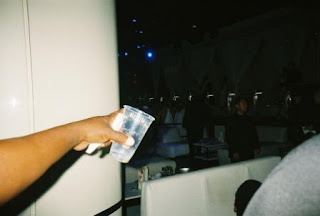 Kind of like when you point to something for a dog and it looks at your finger.
With regard to the photo at the top: Betcha can't tell which one is Knucklehead.
Posted by The Lady Who Doesn't Lunch: at 10:55 AM

Oo, that middle photo looks like it's from the viewpoint of either Otis Day or one of The Nights after a good happy hour in Vegas.

My family and I (meaning three of my four brothers, their wives, one child and my mom) drove from Phoenix, Arizona to Vegas to stay in Caesar's Palace. Talk about National Lampoon's vacation. That was unforgettable.

This is just a bit of an eerie coincidence, but I sound exactly like your hubby when I am out drinking!

I'm heading to Vegas in a few weeks, too. Note to friends: please don't let me try to withdraw $4,000, even though I'd love to buy a round for the cirque folks!

And what will the lovely lady be doing while MDH and his bros are out causing a ruckus?

I don't even want to guess what the interest rate is on a $4,000 cash advance -- probably 20%/month or something unbelievable.

Gosh just tell him not to stay at the Monte Carlo!

I can't wait for the outcome of this one. Seriously. It's a blog waiting to happen.

Now I see why people get married: someone's gotta bail you out.

hey, did you hear the Monte Carlo in Vegas is on fire? Crazy.

BWAAAAH!! Dying here!! You MUST tell the story about the sausage sandwich on New Year's Eve!!! That still makes me laugh myself silly all these years later!

Is Knucklehead the one wearing a dress? (kidding!)

Yes. what Churlita said. I had to check to see that they were at a burning casino, too.

I was very easily able to understand the words of MDH on the phone with you. I used to use that vocabulary all the time.

I tried to get tickets a couple of years ago for the Super Bowl. The main reason is that is was in Detroit (close by) and the Steelers were playing (favorite team)...that quest came up empty.

Player - yes? Were you calling for me?

Tara - all the pictures are from the viewpoint of one very drunken man. It's a very boring drive indeed and likely to intensify family squabbles.

Skydad - I hope your wife finds it more endearing than I do.

MB - Howdy! Have fun in Las Vegas! Thank Dog for the fraud department at Visa.

SRU - I'm planning my usual sloppiness and a night out with the girls on Saturday.

BSUWG - Tell me about it! A drunk with too much disposable income is dangerous to our retirement plans.

Guv - he has been watching the news coverage NON STOP. No worries. The follow up post may be pretty boring because I don't ask too many questions when he comes home. Besides, Miami is only going to be with them for 1 day and he is the primary instigator of the maddness.

Pistols - It is my strict policy not to post bail right away. Fortunately I've never had to test the flexibility of the policy (yet). We're usually more worried about Knucklehead's bail.

Churlita - I've heard of nothing but, since MDH came home from work yesterday.

Madame - The nugget for the story is there I just have to find the right context to tell the tale.

Gwen - They are all knuckleheads, but the real Knucklehead is the one on the far right bottom. In better days when he had all his teeth.

Dmarks - that's why the first thing we do when we arrive in a new hotel suite is look at the back of the door at the fire exits map.