A Thing of Beauty Is A Joy for Three or Four Years... Maybe Five Tops

Time sure does fly when you're too busy to lay around with unwashed hair in pajama pants all day, watching TV and eating everything but the wallpaper for several weeks. Or as I like to call it - having a full time job. I hope you don't mind, but I've been living life for a change.

Oh, I'm still the same old me. Still throwing internal tantrums at the supermarket checkout and spending too much money on shoes and personal hygiene products, but I'm somewhat new and improved. Since returning back to work my skin has cleared up (probably from all that daily washing I'm doing now), I have lost 9 lbs and I could swear that my step contains a trace of a swagger, although that could be because of all the cute new shoes I bought to "smarten up my work wardrobe".

Anyhoo... I missed you. As in you my blog and you my blogger friends in blogger world. According to my Google Reader I have 375 unread blog posts. I'll try my best to get caught up on all the important things that have been going on in your lives, but holy jesus you people are wordy so probably not, but I'll try.

Meanwhile I hope all of you are enjoying Spring as much as MDH and I have been.

Now here's some pictures of some new shit I bought to replace some old shit that I was either bored with and/or was falling apart and now that I'm back to work can afford to replace without running it by MDH first. I always have trouble justifying these kinds of purchases with MDH who believes that you should never buy anything new until the old thing breaks or is no longer usable and that's just crazy talk. Also I feel I should mention that somehow this rule doesn't seem to apply to electronics such as DVD players and stereo equipment.

It doesn't really matter because I don't ever listen to him or care what he thinks and simply buy whatever the hell I want anyway. If we lived by his standard our house would look like the set of Sanford and Son. 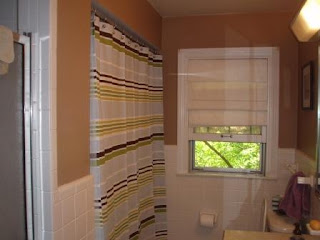 Ah, nothing says Spring quite like a new shower curtain. Am I right or am I right? 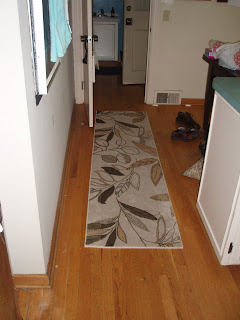 Our old kitchen floor runner had pretty much disappeared under a 22"x84" rectangle of matted cat fur, pine needles and cookie crumbs... 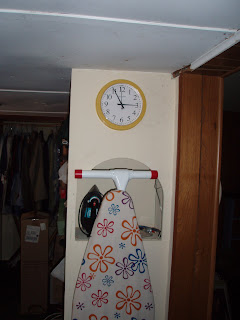 Last week we got new cable, which required a new cable box. The new cable box doesn't have a clock on it and you never realize how much you come to rely on that fucking cable box clock until it's gone. So I bought this pretty yellow clock to hang on the wall above the TV but MDH said the ticking was too loud and now it's been relegated to the basement. 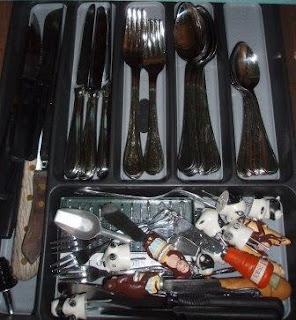 It seems slightly ridiculous to replace the flatware organizer tray, but the old one was too small and slid all around the place. Besides it was another one of those holdover things from MDH's previous marriage. This flatware organizer try is mine - all mine. It fits perfectly in the drawer and now there's a proper spot for my cow head and ass corn holders and my monkey jazz band canape knives. 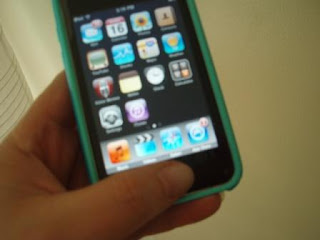 The battery has been dying on my old iPod and I couldn't stand the thought of waiting until it fully died so I bought myself a new iPod Touch. The 32GB one. Oh yes I did. I love it and pet it and call it George. You can look at it, but don't touch it.