If You're Happy & You Know It WTF?

How's your summer been? Mine has been smashing. I can't think of any one thing that stands out that should cause me to make such a positive statement to describe my life in general, especially over such a long expanse of time since my last post, butcha know what? I'm happy. And I know it. Kiss my ass.

MDH and I have had a summer filled with friends, travel and just the right amount of family (except for Knucklehead) and house guests.

Probably the biggest news is that I have a new job. I know, I know, but calm yourself, it sounds more important than it is... It's a new job, but it's still at Large Corporation and I'm still a contractor. I sit at my same desk, have my same parking space, and earn the same wage.

The good points are:

The bad points are..., well, "bad" is rather harsh so let's rephrase that.
The bleh points are:
Here are some other bullet points to catch you up with recent doings and goings on in Ladyland: 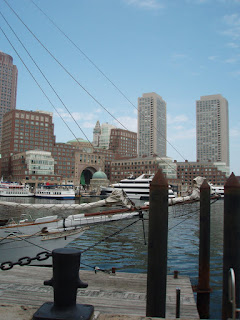 Went to Boston to visit my mother in law for her 80th birthday. Highlights included:
1. Stayed at a hotel within walking distance to the North End and during the course of the week we ate enough tasty Italian treats to last us the rest of the year. I tried some new things that were surprising and delightful (beef carpaccio - I tend to avoid raw meat, but this was so finely sliced it melted on the tongue like cotton candy) and some things that were surprising and revolting (Campari and Soda - I thought it looked refreshing and chic, but it tasted like what I imagine drinking a urine sample over ice in an elegant glass with a twist of lime might be like).

2. Visited Peacefield in Quincy Mass., homestead of 4 generations of the John & Abigail Adams family, including John Quincy Adams, which brings my list of presidential homes visited up to a whopping 10 (how ya like me now CDP?). Peacefield is a short T ride away from the city. No car needed for this adventure. It is awesome. You should go.

3. Spent a gorgeous afternoon wandering leisurely around Harvard Square, popping in and out of shops, laughing and generally enjoying quality, wholesome family time with MDH and my mother in law.
(Insert record scratch sound bite here.)
At least that was the original plan. Oh, we spent the day wandering around Harvard Square all right, but it was hardly leisurely, wholesome or enjoyable because for some reason my brother in law Knucklehead wanted to tag along and turn it into a shit sack.
These days Knucklehead, fresh from his last tour in the can, is whacked out of his mind on prescription pain medications (which provide only a slight improvement to his behaviour since the days when his drug of choice was crack). So we spent a gorgeous afternoon wandering around Harvard Square with Knucklehead, who stopped every five minutes to smoke, hollered at traffic, loudly made rude comments about me, my mother-in-law, MDH and random strangers that he considered to be "fuckin' freaks and freeloaders" (he was able to recognize his own kind apparently), and generally embarrassed the crap out of us for about 4 hours. It was exhausting.

4. Oh, and now Knucklehead walks with a cane that he occasionally shakes in the air at people and cars and goes, "Baaagh!"
5. He's only 47.
6. Spent some great nights hanging out with my brother-in-law Las Vegas, also in town for the 80th birthday festivities, and his 3 grown boys and their various girlfriends. We're so proud of the next generation of little rakes, not a crack head in the bunch. Although my one niece, Knuckleheads daughter, poor kid, kind of reminds me of (I hesitate to say it) Snookie (only taller and pretty). MDH and I are keeping an eye peeled for her.

Went Up North With Friends:

1. Our friends R&R and their two kids visited us here from Washington DC and we were thrilled. They actually spent their summer vacation in Michigan. People do that. They spent two nights here at our house and then headed up north to Glen Arbor, where MDH and I joined them a few days later for the weekend.

2. I went tubing, which in Ohio means that you get dragged along, bouncing uncontrollably behind a speeding pontoon, piloted by my lunatic hillbilly cousin-in-law Bubby, in a murky brown lake which typically goes something like this: 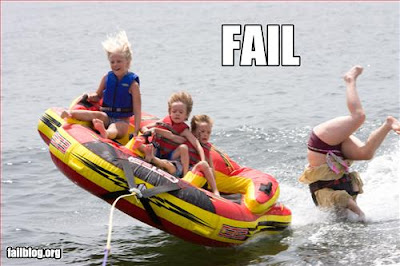 But in Michigan tubing is something entirely different and I loved it hard. We floated gently, and safely if I might add, down a clear, clean river. I opted for a tube with a bottom so that I could sit indian style. I also snagged a paddle so that I could more easily steer myself away from any potential dirty muck or imagined crocodiles and river sharks. I will do this again.

1. He's known for his pot humor, so it might be odd for me to love him so much, since I don't smoke it, but I love his podcast and am very excited for his new show coming to Comedy Central this fall, The Benson Interruption. I think he's one of those people who is just naturally funny and I love him, there it is.

2. Had the beginnings of what I thought was a bad cold, so hesitated to say hello after the show, as I didn't want to make him sick. I know a thing or two about what it's like to travel for a living and be sick when you're on the road, but MDH encouraged me to go up. I am not a gusher, but I assume that when you are an entertainer by trade that you appreciate hearing nice things about your work so I mentally prepared a little mini-speech. Something quick and simple, like, I love your podcast, I think you're so funny and can't wait for the new show and then I move along.

3. I got up there and he tried to shake my hand and I declined, so he gave me a little arm around half hug. Ok. Time for my nice words... here we go...

4. All I was able to say was "love your podcast" and the next thing I knew I was somehow cockblocked by MDH. Yes. You read that correctly. Well, maybe not. I mean I wasn't trying to hook up, just say hi, be nice and move on. And last time I checked I don't have a cock, but still, whatever you want to call it, my own darling husband, my love and partner on my path of life, who had encouraged me to go up and say hi in the first place... People it was freakish. The moment words of my prepared mini-speech started coming out of my mouth, MDH nearly pushed me out of the way to buy a CD, get it signed and started making pothead smalltalk with Monsiuer Benson as if I wasn't even there. If you didn't know we were married you might have thought we were strangers. It was bi-zarre.

5. The ride home from the comedy club was a bit chilly. I'm sure you can imagine.

6. Turns out I had a rotten case of the flu. I am just now recovering. I hope I didn't give Doug Benson the flu. I've been checking periodically on Twitter to make sure he is OK. Very out of character for me to give enough of a shit about anyone to check their tweets (I shudder to even type that out), but I feel a strong sense of personal responsability about this. So far I think he's OK.

Anyhoo... I hope you've been having a great summer too! Tell me about it in the comments please.

BTW: Here are a couple of other podcasts I've been enjoying while I perform my new job this summer (available for free on iTunes):

Labels: happy for real, knucklehead, leisure, summer, the real or imagined impact I have on the lives of professional comedians, the summer of the podcast, travel, work shit
Newer Posts Older Posts Home
Subscribe to: Posts (Atom)