I'm Sure Your Family Is Weird Too

The infantile humor, butthole themed post I wrote the other day made me think about my little sister a lot so I thought I would share a story about her, our family and how sometimes when you teach your children that something they do is fun or funny, it may seem quite bizarre and unfunny when witnessed by others.

For example: My sister's habit of hiding behind the wall that divided the kitchen from the bedroom hallway, then jumping out with arms stretched wide, naked and yelling "Surprise!"

We were surprised the first time. It was an original idea she cooked up on her own. Even though nobody actually taught her to do it, my parents and I accidentally encouraged her by not being able to maintain our composure and laughing every time she did it, which for a short time was quite often.

She liked to make people laugh.

Of course, no matter how hilarious, there was no excuse for this behavior and she would be scolded severely and told to put her clothes back on, but my sister was not fooled by our parent’s stern tone. She knew it was damn funny because she could clearly see that our parents were barely holding it together, ready to bust out laughing again at any moment.

Meanwhile my parents lived in fear that she would perform “Surprise I'm Naked" in front of company.

It might even have been funny or cute to people outside our family if she was 3 or 4, but alas she was 11 during her naked surprise phase. As some of you may already know, my sister had Down Syndrome and although intellectually she really was about 3 or 4, people outside of our nuclear family probably would've found the naked surprise game unsettling and unfunny and rightly so.

Eventually our mother laid down the law, forced herself to wear a poker face, threatened my father and me within an inch of our lives if we dared start laughing and put a stop to the naked surprise game.

(I suppose I should give you a little more background - so if you want you can read this older post I wrote about my sister several months ago - but don't you dare feel sorry or sad because that's not why I write about her - in fact quite the opposite.)

My sister had the learning disabilities and almond shaped eyes that a lot of people naturally associate with Down Syndrome, but it also caused her to have a huge protruding tongue and the roof of her mouth to be shaped like an exaggerated lower case "n". Normal sounding speech was very difficult and frustrating for her. We all learned sign language to help her communicate, but the kid liked to talk - a lot.

Nobody but our parents and I could ever understand what the hell my sister was saying. I was probably better at it than anybody and acted as translator most of the time.

Like any normal kid, she also liked TV - a lot. In addition to cartoons, such as Scooby-Doo and all the other kid oriented shows, she loved the variety shows that used to be on in the 70's and 80's like Hee Haw, Lawrence Welk, Barbara Mandrell & the Mandrell Sisters, Sonny & Cher, and so on. With the exception of Hee Haw and Lawrence Welk, didn't we all? (No? Alrighty.)

Based upon her love a TV, cartoons, and variety shows, she liked to play a little game we called Scooby-Doo. It was easy enough to play. Basically it’s a name calling game where my sister would point in your face and say “Scooby-Doo” in an accusatory tone, followed by a big grin and a fit of giggles. The correct response, if you chose to play along, was to point in her face and call her Scooby-Doo right back. She would mix it up from time to time by using other names combed from her TV watching repertoire, based on whatever TV show, character or celebrity she was interested in at the time.

Because her speech was impaired it came out sounding like this:

It was delightful that something so simple could make her so happy. She could play at this game all day, which could at times, as I’m sure you can imagine, be pretty annoying, especially if you were trying to read or watch TV. However, since it was fairly uncomplicated and the power of her crazy charm was completely irresistible, we usually indulged her and played anyway, saying the names back at her correctly, but using the same accusatory tone.

It seemed like a harmless enough game until she developed her bizarre passion for Bob Hope.

Her love of variety shows peaked with Bob Hope specials. She would bring the TV Guide to my mother, jumping and squealing whenever she saw a promo for the next Bob Hope Special to make sure my mom knew what day and time it was on so she wouldn't miss it. Bob Hope's specials would be her main topic of conversation for the weeks and days prior to the airing of the show. Naturally during these times Bob Hope would be the primary focus of the Scooby-Doo name calling game.

Probably because we knew that she was saying Bob Hope, it never dawned on us that it sounded like Butthole, until my mom got a call from my sister's teacher when she started playing the game at school. 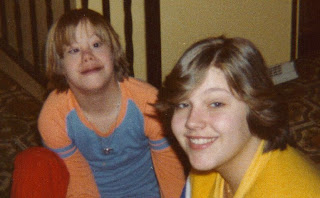 That was the end of the Scooby-Doo game. Sort of. My parents and I still call each other Ba Ho sometimes as an inside joke in my sister's honor. We laugh our buttholes off.

Since you read through all that, here is a picture of my sister and me taken around the time of the surprise naked escapades. She's sporting a chocolate cookie mustache and I look like I've just farted and blamed it on her. Or is it the other way around?
Posted by The Lady Who Doesn't Lunch: at 3:27 PM

That was so sweet.

that was such a lovely post, I enjoyed reading that!

there are a lot of people I could call a bah ho right now too, your sister was a darling.

Great story. What would we have done without our little sisters? I lost mine three years ago and remembering stories from our childhood and growing up makes it a lot easier.

You make me smile so often. You rock!

This was a great post and despite the Hee Haw warning, I certainly did not guess she was going to fall for Bob Hope!!!

Chris - exactly the reaction I was hoping for.

Betty - if you're in on the joke Bah Ho is really much funnier than Butthole.

Player - Thank you. In the right company I'm sure it'll be hilarious, just don't play this game outside.

WendyB - There is no accounting for taste. Thankfully she had a TV in her room.

Great story! I can picture it all happening. And by the way, I have no recollection of the Barbara Mandrell show! I'll have to see if I can dig one up on youtube. Thanks again for sharing.

That's such a great photo of the two of you!

I vaguely remember "Hee Haw" and "Sonny & Cher" - especially Hee Haw because of the old lady with the price tag on her hat. Oh and of course "Scooby Doo"/"Dooby-Doop".

Very sweet....I am sure she appreciates the tribute.

My parents are notorious for hearing me or the Alien, mostly me, say or do something mean-funny and laughing. Then they would, while still laughing, say "that's not nice, stop it". I always found that rather amusing. Still do...I will spout something un-PC during the news or something and still get a similar reaction.

I didn't realize Bob Hope was still culturally relevant circa then. But anyone who loves the Scooby Doo is all right by me.

I loved that story. You are a great story teller and have a great sense of humor. Thank you for sharing your sister with us.

I love this story!!! I found you through Renaissance Woman's blog - glad I found you, too!

That was hilarious. You and your sis seemed to be good friends. I lost it at "Dunny Chair" (isn't dunny Australian for toilet?) Then 'bah ho' just about killed me.

Plus Bob Hope of all people. Too funny.

My little sister was pure, unfiltered evil although she grew up ok. I remind her sometimes of her past evil. It's my job.

Madame - One of my greatest regrets is that the people in my life that I love (like you and Nature Boy) didn't get to meet her. If she had lived - she would be living with me and MDH.

Tara - I think I was about 14 in the photo - my hair style is not much different!

The old lady with the price tag hat was Minnie Pearl, a fact I almost wish I didn't know. I was subjected to a lot of Hee Haw when I was growing up.

Evil - My parents are very stern kind of people so I don't think things would have been nearly as much fun without my sister around to teach us how to goof.

Pistols - I'm not sure how culturally relevant he was but there were at least 4 specials a year. I remember watching some of his Viet Nam shows that were aired during the war, but I'm old(ish) and have a long memory. My sister was OK in nearly everyone's book. She was irresistable.

R-Woman - thanks! I like telling my stories and the ones about my sister I hope have a good message for everyone.

Superstar - I have a sneaking suspicion you're going to try it out on the plumber.

MB - welcome! Glad you enjoyed it.

Guv - This is the first I've heard of Dunny as anything but speech impairment and I like it!
My sister was pure unfiltered sweetness which made me the evil one in the family by default. Someone had to be bad.

Fantastic story! I will now be calling people Bah Ho in your sister's honor.

I am constanly finding myself a day late (and a dollar short?) to your posts lately.

I am well aware of the "Naked Surprise" funnies. My aunt and uncle have been foster parents since the 60's. They are the foster parents who willingly take in any child no matter what. In fact, they adopted three mentally disabled (one also physically disabled)children they cared for that they knew nobody else would adopt.

"Anderson" also liked to do the Naked Surprise but she liked to top it off by bending over in front of you.

You write so well. That was such a great story. When I try to write about my sister it sounds like I'm goofing on her... and that's not what I want to do.