How to Tell If A Movie Will Suck

Yes, I'm really going to totally ignore the fact that I haven't posted on this blog for 4 months and hop right in to what I hope will be a riveting entry for all 8 of you out there who still keep popping in from time to time. Surprise for you, eh? You've been checking in faithfully and disappointed for so long and lo and behold today is your day. A new fucking post. Just for you. Seriously. It's just for you, you're the only one left still visiting.

It being awards season and the Oscar's fast upon us, I have been thinking about movies a lot lately and then this post was inspired when I saw a horrible and rather sad commericial for the new movie with Adam Sandler and Jennifer Aniston in it. Here goes:

Here’s how I decide based television commercials, whether or not I think I movie is going to suck donkey balls.

1. The movie stars, Adam Sandler*, Tim Alan**, John Travolta***, Robin Williams**** or Tom Cruise*****. Or any combination of those five people. My advice? Don’t waste your money to see this first run in a theater. Wait until 5 or 6 years from now and see it on a night when you happen to be hammered, high, unable to sleep or any combination of those 3 things, and it happens to be on TBS during a time when it happens that you cannot find the remote and are unable to change the channel, so technically it is the only thing on TV. Or… you could get your lazy ass up off the sofa, walk across the room and turn off the goddamn TV using a combination of your index finger and the power button, since the only thing on is this shitty movie with badly dubbed out curse words on TBS, who seem to have a knack for cutting to commercial in the middle of a goddamn sentence or constantly throwing animated graphics advertising some shitty Tyler Perry produced sit-com that take up the entire fucking screen and have just covered up the fucking subtitles I was trying to read. Motherfucking TBS. Motherfucking subtitles. Motherfucking Tyler Perry. What was I talking about?


2. The commercial starts off with the words “Critics are raving!” and then the screen is peppered with ambiguous, one word quotes in tiny lettering that could be construed in many ways (“Unbelievable!”, “Powerful!”, “Hypnotic!”) jump quickly on and off the screen like tiny fleas, by movie critics no one has ever heard of from publications that can’t possibly be real. Yeah – this one is probably sucking pretty hard.


3. The commercial shows as many quick edited crotch hits, cleavage shots and plot irrelevant shenanigans as possible (fart noises, yowling cats, growling dogs, close ups of crying baby faces, references to vaginas, penises or poop). The absence of any information hinting at any kind of critical review is palpable and only made more so by the tagline at the end that says “Now Playing Everywhere!” which is either the only positive sounding thing that can be said for the film or perhaps it’s actually a cryptic warning or cry for help. It’s playing. Everywhere. Be careful.

*I like Adam Sandler and think his movies often have pretty funny things going on in them, but that doesn’t mean that his movies don’t suck. I often put his movies in the category of “sucks but will probably see it anyway on DVD”.

**Tim Allen gets a gimme for being the voice of Buzz Lightyear, but otherwise I can’t think of one thing I have ever seen him in that was funny to me at all. I think he’s a hack – sue me. 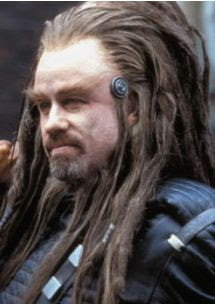 ***I know, I know, everyone loves John Fucking Travolta, and he also gets a gimme for Pulp Fiction, but what have you done for us lately John Travolta? I’m sure he’s a lovely human soul, but he irritates me with his stupid giant plane and his poor movie role choices. Outside of Pulp Fiction (and Get Shorty) his movies smack of desperation to me and I always envision him in that stupid get up he wore in the L.Ron Hubbard movie. If that’s not enough for me to find his movies lame I have two words for you – Old Dogs.

****I almost feel bad about this one, cause I really do love Robin Williams, nanoo, nanoo and all that, but his roles in the past 10 years have been so hit or miss that I choose miss most of the time, unless I hear otherwise good reviews. And do I have to say it again? Old Dogs.

*****If it stars Tom Cruise I refuse to see it at all (almost ever). Below is an alphabetical listing (it’s short) of the people for which I have longstanding boycotts of their bodies of work:

1. Tom Arnold – I think he might be mildly retarded and only sometimes funny by accident. More often I think he’s an untalented, pompous boob. But whatever. He’s so seldom in anything I’m remotely interested in that my hatred of his stupid face is really a non issue.


2. Tom Cruise – I’m not sure he’s fully human. I think he’s an overblown, pompous asshole. Even though he’s managed to weasel himself into cameos in a couple of movies I have seen in the last 10 years or so, and therefore subjected me to accidentally having to see him once or twice, I still cannot honestly say that the last movie I saw him in was A Few Good Men. However, I CAN say that I have not chosen to see him intentionally in anything since The Firm, except A Few Good Men and that was only because my friend Dan had free tickets for a sneak preview, which, by the way, we both thought sucked donkey balls, even though the commercials claimed that real critics, that people had actually heard of, were raving. We were appalled when it was nominated for an Oscar for best film and relieved when it didn’t win. Anyhoo… these days he really only ever does about one film a year – so my hatred of him is no biggie and my purposeful avoidance of seeing him is easily maintained.
Posted by The Lady Who Doesn't Lunch: at 6:26 PM 18 comments:

Labels: boycott, hatred, huge fat ass, I call movies "films" so I'm better than you, maybe it's scientology that I really dislike and not Tom Cruise and John Travolta at all
Newer Posts Older Posts Home
Subscribe to: Posts (Atom)