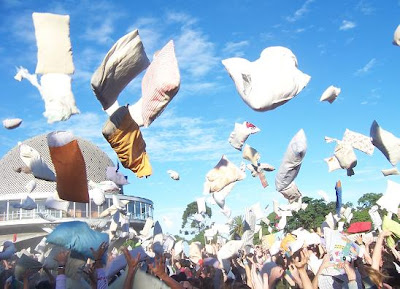 I really hate it when MDH goes to bed before me.

Oh I realize that MDH is a grown ass man, who can make decisions for himself and frankly do pretty much whatever the fuck he wants, up to and including going to bed at whatever time he damn well pleases... but still, it bugs the shit out of me when he goes to bed before I'm ready. I like us to go to bed at the same time. That's how we usually do it.

Actually I like to get up there just a scant few minutes before he does. I turn on the over head light and then turn on our individual bedside lamps and then go back and turn off the overhead light. If it's a day that I haven't made the bed then I'll take a moment to straighten out the sheets, fluff up the pillows and even up the blanket distribution. Nobody asks me to do this, it's just nice, so I do it.

On nights when MDH goes to bed before me he just plops his ass right into the bed. Plop.

There is no preparation.

There is no consideration.

He doesn't turn the light on for me or fluff up or straighten anything. This is leading me to think that perhaps I should stop going up there before him and preparing things for us, because obviously he doesn't appreciate it. Perhaps maybe he's never even noticed that I do all that nice stuff at all. And if he doesn't notice or appreciate it then why should I continue to do it?

Here is why I will continue to do it... because it's much easier than the alternative, which I will now describe:

When I'm ready to go to bed I arrive upstairs to a very, very dark bedroom. You see, we now live on the surface of the sun* and have installed both blinds and blackout curtains over the windows in order to keep our bedroom from becoming a pizza oven and that we not burn to death.

We're talking dangerous dark, like smash your face into a door frame and stub your toe and scream in blood curdling pain kind of dark, so I like to flip on the overhead light before I walk over to my side of the bed to turn on my bedside lamp. The flipping on of the overhead light causes MDH wake up slightly and moan in agony at the bright light in his face.

He does this even without the overhead light, after I have groped my way slowly across the room. The instant I snap on my bedside lamp the moaning and whining begins.

It is at this point, when the light comes on that I notice the complete fucked-up-ed-ness of the pillows and covers. Basically, he is spread eagled in the middle of the bed, somehow clutching every corner of the blanket and now untucked sheets and desperately clinging to my pillows** like a drowning man to a life raft.

Now is the time that I must attempt to shove him back over to his side of the bed (an enormous king-sized bed, mind you) whilst simultaneously prying him loose from my pillows and unclenching the blankets*** and sheets from his grasp. He is a large, large man, who all the while is whining and groaning like a large, large infant and I want to bash his head in.

My research concludes that the length of time that has passed between when he chose to go to bed and when I chose to join him there is directly proportionate to the degree to which the bed is fucked up and decibel of sleepy whining and moaning that occurs.

UPDATE: As Veg so rightly pointed out in the comments, having a made bed beforehand actually prevents this particular rage of mine from occcuring. Yesterday I did not make the bed. So I am most definitely, at least partly to blame.

I'd also like to just make sure we all understand that the going to bed at different times and MDH whining and hogging all of the bedding is actually a pretty rare thing around here. The bed is usually made and we usually go to bed at the same time. Yesterday was a rare non-made bed day and an even more rare unbalanced bedtimes. Rare as it is, apparently it still makes me fly into a fit.

**I am a diva and I have 4 pillows and I use them all. Furthermore, they are not just any pillows, they cost ... well never mind how much they cost... they are fancy pants, extra firm goose down pillows. They are glorious and they are mine(!). The reason I have 4 is because I originally bought 2 for me and 2 for MDH, but he balked at the price and insisted he didn't like them. I told him fine, go pick out your own damn pillows. So he went to K-Mart and picked out his own from the $5 bin, and was rather smug about it. I now use all 4 of the fancy pants pillows. I make myself a little nest and it's wonderful. I sleep like an angel. Anyhoo... MDH prefers to use the $5 foam poly pillows that are so stiff they could stand up by themselves if they weren't so misshapen due to their being made from a horrible space age polymer by 3 year old Sri-Lankans. They're like... old beat up sofa cushions jammed into 600 thread count pillowcases. It's weird, and yet MDH refuses to acknowledge the clear and marked difference between the obvious quality of my lush and pliable goose down dream givers and his blobby, misshapen freak puffs. He even talks smack about my pillows and yet I have busted him multiple times hogging them when I have failed to separate them on the bed properly.

***You are correct, we don't have need of a lot of blankets on the surface of the sun. This summer we are only using one light weight quilt, but it is still of the utmost importance that it remain evenly distributed on the bed and not be hogged.

Labels: happy marriage, living with a wild bear, the big stick up my ass, theater curtains are very big

The title of this post is actually the description in our cable TV listing of one episode of a series I have never watched, and likely never will, called My Crazy Addiction or some such, but for some reason, when I came across the phrase it struck a chord.

Oh, don't you worry about me! Although I am still jobless, bored and lonely, and now have the added benefit of being in a strange city where I don't know anyone but my husband and my OBGYN (my new BFF), I'm not currently wearing a diaper or eating dryer sheets for jollies, but sometimes I feel I might snap and these are areas of madness I fear I might wander into. Probably not. I can't even watch a show about it, so I feel I'm pretty safe.

Anyhoo... I have some questions about this particular episode of the program. Mind you, I don't feel strongly enough about my questions to actually watch the program, so I decided to type it all out and throw it out into the ether and see how she flies.

Conveniently, that point brings me to the next assumption, because when I say "these people", I am assuming the program is about two separate people, one a diaper wearer and one a dryer sheet eater. Also, grammatically speaking, the slash helps along that theory. Although I've been known to simultaneously abuse and neglect my comma privileges in my own writing I will assume if the show is about one person who has the duel misfortune of being both addicted to wearing diapers and snacking on Bounce there would be a comma and not a slash. I hope to high heaven it's not the same person.

I also assume, as mentioned above, that these people are getting some kind of jollies from respectively, hopefully separately, wearing diapers and eating dryer sheets. I mean, there wouldn't be much of show if the person wearing diapers had to wear them due to some physical problem involving incontinence, or being a toddler. That would just be cruel, so I assume they are choosing this... um... diaper wearing lifestyle.

The next assumption is a little more serious. I'm going to assume that there is some portion of the population who does not appear on this program, who are suffering in silence with their own weird addiction. They are watching this show and thinking, "I am am not alone!", and subsequently finding some comfort in that, and maybe even as a direct result of this epiphany deciding to seek help.

My last assumption is tied pretty tightly to the previous assumption. Because I need to continue to believe in the greater good in humanity, I'm going to assume that at some point during the course of this program there is some kind of intervention involving psychiatric evaluations and therapy and that these poor people are setting on a course to getting some real help.

So those are my assumptions. Here are my questions:

1. Are the diapers disposable or cloth? I am a terrible person because I find myself secretly hoping they are disposable because although cloth diapers are environmentally friendly and all, disposable diapers make a little crunch-crunch noise and I find that hilarious.

2. Is the diaper wearer actually shitting him or her self? That sounds damn uncomfortable.

(Oopsie! I before I type the next question I have to add in the assumption that the diaper wearer is single! What better way to keep an intimate relationship at bay, right?)

3. Are the dryer sheets scented or unscented? Unlike the diaper question I have no leanings for the answer one way or the other, but I do feel that chewing on an unscented dryer sheet would be my personal preference, as I perceive the scented ones probably just taste like soap.

4. Who is watching this show and do they come away from their viewing experience enlightened or ashamed?