Much Ado About Litter 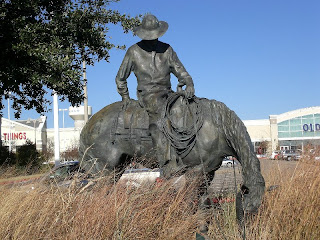 It's a done deal. We live in Texas now and I find Texas to be way more Texas-y than I imagined it would be. I mean, I see people who wear ten gallon hats to social events and even though I live in a suburb of Dallas, about 3 blocks from here is a large herd of Longhorn steer. Go 3 blocks in the other direction and you will find large bronze statuary of cowboys riding wild-maned broncos and roping* calves. Please notice in this particular photo, the cowpoke is watching intently** as his horse grazes gently in the parking lot of a mall.

Mostly though, what has been weird is the fact that MDH and I have been living in a hotel for the past two weeks. With our cat of course, who spent the first week hiding under the bed most of the day after his first encounter with the hotel maid and her very noisy sweeper. He's finally settled in now and is almost back to normal... just in time for us to move again this weekend into our new apartment. 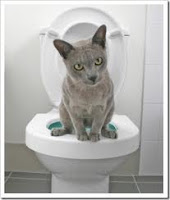 Speaking of the cat - I would just like to take a moment to mention how much fun it isn't to have a litterbox in your living room, which is 3 feet from your bed when you live in a 400 sqft extended stay hotel. Having a litterbox in the living room of a 400 sqft extended stay hotel room goes a long way to making 400 sqft seem as small as a phone booth. A very smelly phone booth.

The litterbox used to be in the basement of our old house and I guess I took for granted that I would never be woken up in the middle of the night by the horrifying stench created when our cat takes a giant shit 3 feet from our bed. It's not Turtle's fault. He's a complete gentleman and does exactly as he is supposed to do, exactly where he is supposed to do it and is quite tidy, but the proximity of his shit box has caused me to decide that our next cat will be toilet trained. I've seen it on YouTube, so I know it's possible.

Anyhoo... other than the whole litterbox thing, living in the hotel hasn't been nearly as bad as I'd imagined. We have a little kitchen (which, not to beat this close proximity to cat shit thing into the ground, but is also 3 feet from the litterbox) where I have been able to prepare simple, elegant meals of microwaved burritos and toast. Delightful!

Needless to say... we're ready to move into our new apartment which, prior to living in the hotel, we worried would be too small, but now seems like a 1200 sqft mansion.

We had a little scare earlier this week with the apartment management company. I missed their call, as I was at that very moment registering my car for Texas plates, to the address and apartment number that we signed a lease for several weeks ago, telling me that the asshole who currently lives in the apartment that we signed the lease for several weeks ago... um... well... he didn't ever actually move out of the apartment. The apartment complex has given us another apartment of the same floorplan to move into, but I was and still am a little bit livid. I set up electrical service, ordered new checks and registered my vehicle, which now has to all be redone.

It makes me wonder though - is this guy a dick or just an idiot? Either way I plan to make his life miserable by requesting home visits to that address from Mormons and Jehovah's Witnesses.*** Do you think Dominos would deliver a pizza with ex-lax on it?


*People - I originally typed "raping" by accident and laughed so hard I had to run and change my underpants.

**Probably watching to make sure that his nice horsey doesn't choke on a plastic shopping bag or disposable diaper.

*** I wouldn't really ever do that. Not because it's mean, but mainly because he has apologized and agreed to bring me whatever mail of ours that gets sent to that address, and I really need him to do that. I changed the mail forwarding again of course, but there are sure to be some stragglers. So instead of sending him Mormons or leaving flaming bags of my poo on his porch****, I will smile sweetly and thank him for bringing me our mail, while secretly I quietly curse him until such time as I'm able to get over it or all the mail is correctly forwarded, whichever comes first.