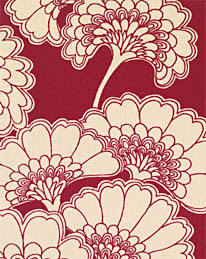 Last Wednesday night my friend Rachel called me to square up some plans we were making to get together for dinner and a movie. The conversation started with a common question you might ask when you call up a friend in the evening, "What are you doing?"

Generally when you tell someone you're watching a movie they might want to know what it is and what it's about. So of course when I told her I was watching a movie she asked, "Oh, what is it?" Probably she was expecting that I'd say "Terminator" or "Sleepless in Seattle" or some other movie title that any normal person might recognize and immediately relate to.

For me though, answering this question is always trickier than you might imagine because I prefer non-mainstream kinds of stuff. For example, at the time I was watching a documentary about an Australian wall paper designer.

It's nearly impossible to make that sound interesting so in order not to come across like a total dork I felt the need to qualify the film and over explain the plot and characters and rationalize why I might be watching such a film. Rachel insisted that it sounded cool, but I blathered on and on about it just the same.

Anyhoo... I thought I'd blather about it here too.

Yes. I watched a brilliant documentary by Australian director Gillian Armstrong called Unfolding Florence, about the larger than life Florence Broadhurst who was murdered at the age of 78 and best known for her silk screened wallpapers and fabrics she began to design at age 60.

Armstrong let's Broadhurst tell her own story, interspersed with old photos, Monty Python-like animation, and interviews of family, friends and former employees sitting in front of backdrops of her amazing designs. It's a documentary for people who don't like documentaries. I happen to like documentaries so I loved it.

It's a terrific film and if anyone out there is interested in Jazz Age Paris, London during the Blitz and flamboyant old ladies who put on airs and have a great eye for design, then you should watch it.

Her fabrics and wallpapers are still available here and prints can be purchased as art.

Here is very short interview with the director that includes a taste of what the film is like:

OMG! I love indie movies too, mainstream is sooo blah. Its sol-sucking, stupid ridiculous movies that only there for the revenue. Where's the art in that?

On that note, check out this one particular documnetary about Gorge Seurat and the conspiracy behind his famous work, "A Sunday on La Grande Jatte". That's really good too and oh another one one the Free Maison: Secret Society.

Sounds interesting. Thanks for the heads up.

I find that there are many 'main stream' European films that have a more 'indie' feel to them. British and Australian films are great for Engish speakers, but East European film makers make the *most amazing* films. Often a bit gritty, but almost always soul searching and educational.

Lady: I always get sucked in by the crazy documentaries myself. Lately I've been engrossed in a series of BBC documentaries about breasts. Big ones, little ones, the people who wish they were bigger/smaller. I realize this makes me sound like a ginormous PERVERT but hey, who doesn't want to see tiny A-cup ladies wearing sacks of rice around their necks to simulate double Ds?

I love documentaries too, and this one looks great. I will look for it.

I love documentaries. Thanks for the suggestion and link to the prints!

Inspirational for anyone who thinks they're too old to produce anything creative.

Drama - Sometimes I enjoy regular movies, but mostly I find them boring. I've always been interested in the pointillists so I will check out your recommendation.

Heidi - I like anything all kids of stuff, but especially things that are totally new to me. It doesn't necessarily have to be educational, but grit, drama, and quirkiness are helpful features.

Guv - I'm familiar with it - it's one of those somewhat rare series that catch the interest of me and MDH so we can watch it together.

CDP - it's totally worth seeing.

SRU - that was one of the things I really loved. The designs were really familiar and some of them are so beautiful I wished I could look at them up close. The prints are out of our price range for now, but I hope to have one someday.

BSUWG - YES! Exactly - that was one element of the film that I really came away with - no one knew her real age until she died because she never let it be a factor in anything she did. She just lived.

I feel ya Lady. I'm always like "yeah, I'm just watching this documentary on 'Sex in the 70's' to broaden my cultural knowledge, not to mention I love documentaries. No, I didn't watch this sex documentary because I'm sex obsessed or anything. Not at all. Not at all."

oh I've heard about that film....they think she was murdered by the 'granny killer' (I'm not joking -that is the title the media/police gave him..he strangled old ladies in the 90's)