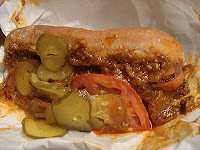 I have lots of things to write about, but most of them are of the long-ish story telling variety and I'm not in the mood to flesh them out today. Besides, it's bill paying day for MDH and he's probably going to boot me out of the office at any moment. He is currently performing his usual Sunday afternoon routine of watching the talking head brigade (Face the Nation, Chris Matthews, Tim Russert, etc..) while simultaneously watching UMass basketball on his laptop and shouting to himself, so I have a little time.

Here instead I'll tell you about our evening out. We forgot to take the camera. I don't have any actual photographic proof, but Rachel, Playtah and Aria were there as witnesses that MDH and I actually went out on a Saturday night.

We went to Billy's Lounge, which is a terrific little bar near our house. Technically it's within walking distance, but since we live in the fucking tundra, we drove. Aria's father's band were the featured performers of the night with the lovely Aria filling in for the regular female vocalist. She, along with the rest of the band, kicked ass. They played the kind of crowd pleasing R&B, Funk and Soul standards that make even the fuddiest of fleece wearing duddies get up and dance.

As we were leaving the bar I noticed that it was 12:50am and that I had a terrible hankerin' for a chili dog. MDH was not keen on the idea. I whined and put up a fuss until I realized that I was the driver, so I shut up and just drove straight to the 24 hour weenie restaurant instead of going home. It's weird that such things as 24 hour hot dog joints exist in a dullsville boring town that normally shuts completely down by 11PM, but I'm so very glad that they do. It's almost all we've got.

By the time we got to the weenie store MDH had decided not only that chili dogs were just the ticket, but also declared me "A Genius!" and trudged across the slushy parking lot to buy our late night snack while I waited in the toasty warm car.

We ate the sloppy doggies back at home hovering over paper towels on the sofa in the den and stayed up until almost 3am talking and laughing.

What a great post..I love your last line.

I loved this post...especially the last line. I live in Denver and we don't have a 24 hour weenie stop! You are lucky that you have each other and can spend time eating weenies! Ha!

The title made me think of some porno/horror combination.

I've never ever had a chili dog, but you made it sound really tempting. What an awesome way to spend the night :)

There are quite a few here in Cleveland. The best is nicknamed "The Old Hot Dog", not a very appetizing nickname, but the late night fare is very good..also it's way better than any fast food crap.

That sounds so great how you ended your night. Slouching over a paper towel while eating something sloppy and delicious is pretty much the best road to take. I'm so hungry right now.

Thank you for providing the perfect template for a Saturday evening date with our husbands. Sounds like a great time (urp)was had by all.

Of course you'd never catch ME drunk on a weekend evening then posting about it, OH no...

So, what you're saying is that you're in the perfect marriage?

I haven't had a greasy midnight snack in years. I should really do that sometime.