Fact:  I would rather rake out my own left eye with a pickle fork than see the new Footloose movie.
Posted by The Lady Who Doesn't Lunch: at 2:50 PM 7 comments: 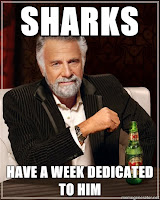 Miami does have a certain mystique about him, I'll give him that.  But that's it.  I'm not going to give him anything else.  He's been here as a house guest for eleven days as of this morning and I feel as though I have nothing left to give.  And yet... he's got that certain something...
He's not quite like that guy from the Dos Equis ads, The Most Interesting Man In the World, about whom Miami said, with not just a little disdain in his tone, and I quote, "Didja know dat guy is in actualities a Jew?", even though MDH and I tried several times to explain to him that The Most Interesting Man In the World is fact not a real person, and that perhaps the actor portraying him in the ads may in fact be of Jewish persuasion, but regardless of the actors religion or ethnic origins it is not important because IT'S A FUCKING BEER CAMPAIGN!!

Anyhoo... in order to turn this shit sack of a situation into a bowl of rose petals, I've decided to once again post my observations about my most intriguing brother in law here on my blog (i.e.. free therapy) in the hopes that my pain will become humor. As some of you may already know, all four of my brothers in law are crass and comically misogynistic in their own ways, but Miami wears the crown... or takes off his shirt.  So below are some things randomly observed and experienced during Miami's still happening recent home invasion visit.

Fact:  About 5 minutes after arriving in our home, 11 long, long days ago, he made a cell phone call and it went down something like this:

Fact:  Miami remembers everyone's birthday and anniversary that he knows and will call them promptly at 6:30am on the big day.  Tuesday was the birthday of my brother in law Las Vegas's ex-wife Geena.

Miami:  Bagh!* I called Geena dis mornin' to wish hers a happy birthday, but she mustnawta been home.
Me:  At 6:30?
Miami:  Yeh, dats when I call everyone.

Fact:  Miami is one of the reasons we don't have a home phone anymore.

Fact:  One afternoon last week Miami doused himself in baby oil and went down to the pool for about 2 and a half hours using a moth eaten, weather beaten, pilly old blanket instead of one of the plush and generously portioned beach towels I laid out for him to use for the pool.

Fact:  I was not offended that he didn't use our beach towels, but did find his preference odd.

Fact:  Yesterday morning as Miami was passing through the living room he stopped, chugged two Coors Tall Boys within the span of 10 minutes as told me all about the new Ken Burns series on PBS called "Prohibition" and wondered if I'd had a chance to catch any of it while I was visiting my parents in Florida over the weekend.  Apparently it's a great series.

Fact:  Also yesterday morning Miami called me out to the balcony and introduced me to a fifty-ish looking neighborlady that I have sometimes seen walking her adorable little toy terrier around the apartment complex. Jackie has an expensive looking haircut, nails that look professionally done and even though she is usually wearing a velour warm up suit (designer label) or some outfit of a similar nature, she is always fully made up, bedecked in sparkly jewelry and pink flip-flops with a little kitten heel.  Miami had somehow struck up a conversation with her from our 2nd floor balcony during a smoke break and discovered that she's an IT recruiter for a large healthcare company who works from her home and discussed with her in graphic detail, well... me... and the fact that I'm "a real smart cookie" and am looking for a job in healthcare IT.

Fact:  She took her dog back to her apartment and came by again a few minutes later and gave me her card and asked me to email her a copy of my resume.

Fact:  I'd no sooner walked upstairs after she gave me her card and Miami came over and took it from me, mumbling something about how he was going to email her his resume too.  He's an out of work construction foreman and in no way looking for a job in healthcare IT.

Fact:  He'd apparently emailed back and forth with Jackie all day and when I came downstairs at around 3pm I noticed he was gone and he didn't come back until MDH came home from work, well after 5pm.  When he came home MDH asked him where he'd been and he said hanging out over at Jackie's place with a couple of the other neighbors trying to network to find a job.
MDH:  Wearing that?
Miami:  Yeh.  It was casual.
MDH:  Were other people wearing shirts?
Miami:  I dunno.  I do not pay attention to such trivial details.

Fact:  I scoured the guest room bathroom including the bathtub and shower the day prior to Miami's arrival.  It was spotless.  And white.  Very white.  I haven't cleaned it since because MDH won't let me, and it's driving me crazy because for some reason the bottom of the tub is black.  Serious Black.  Rimmed with gray streaks.  How does this happen when the only person currently bathing in it lays around my guest room all day?

Fact:  I realize that that last sentence is in fact a question and not a fact.

Fact:  Six months ago Miami called MDH and asked him to loan him $8000 because he found a 3 bedroom, 2 bath condo in Coral Gables being advertised in the paper for $8000.  It never occurred to him that it was a misprint or a rip off.  We didn't loan him the money.

Fact:  Two years ago when Miami was also out of work he called MDH and asked him to buy him a plane ticket to Costa Rica because he had found construction work there.  The company would pay for his room and board while he worked, but he had to pay to fly himself there.  MDH bought him the ticket.

Fact:  The day after Miami was supposed to arrive in Costa Rica he called MDH and asked him to wire him some money because he hadn't counted on the airline charging him to bring all his stuff with him (4 Rubbermaid totes filled with all of Miami's worldly possessions, such as coffee brewer, toaster, blankets, pillows, etc..).  He'd missed his original flight over the totes, so MDH rebooked it for him, with a fee and loaned him the money to pay for all of the totes.

Fact:  Miami called MDH 2 days after arriving in Costa Rica upon realizing the whole thing was a scam** and begged MDH to buy him a ticket home.  And all of his totes.

Fact:  Miami seems to really have taken a shine to our cat Turtle.  He clicks and tuts at him and Turtle piles onto his lap without waiting to be invited and proudly allows Miami to pet him behind the ears.  The other night Miami asked MDH if he could brush the cat.  MDH told him no, but could not explain why.

Fact:  I would have let Miami brush the cat, but stayed out of it and didn't press the issue.

Fact:  The day I left for Florida Miami wasted no time making himself more at home in my absence by helping himself to our collection of red wines (only the Italian ones) and whipping up 2 pounds of baked ziti in my kitchen.

Fact:  Two pounds is a buttload of pasta so I fully expected some leftover baked ziti when I returned home, but the only traces of it were a missing ball of prova, a significant dent in my chunk of 18 month aged parm and the cemented bips of carbon and char that won't seem to budge from my good lasagna pan.  Oh yes let's not forget the rust spots on my good knives that were run through the dishwasher.

New Fact:  MDH paid Miami a few hundred bucks to leave today and he is now gone.  He left during the course of my writing this post.  I heard them early this morning in the guest room quietly mumbling out a negotiation so that I wouldn't hear, and then mere seconds after the mumbling stopped Miami came out of the room with a stack of beat up cardboard boxes and blankets (which I can only assume were his belongings) and began trekking them out to his car.

*"Bagh!"  Is the noise that Miami and also MDH's brother Knucklehead often make when starting a conversation or reacting to new information.

**Miami told a tale of being placed into a room with 4 other men who explained to him that they were slave labor and had never been paid because the company charged them exorbitant rent and took it out of their paychecks so none of them had been able to feed themselves and be able to afford a ticket home.  It was like something stolen from a Charles Dickens nightmare.  So basically Miami sold himself into slavery, but is lucky enough to have a brother who is able to bail him out of this constant, ridiculous bullshit.  My hand to God this shit is true, or at least it's true that this is the story that Miami told us.  With Miami you never can be sure.  It's that mystique.
Posted by The Lady Who Doesn't Lunch: at 11:16 AM 7 comments: