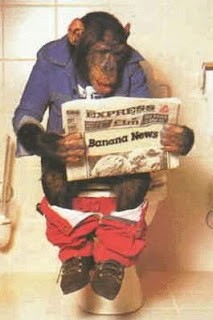 If you were to talk to me about national or international current events you would find that I'm fairly well informed. I've had a subscription to Newsweek since I moved out of my parents house 19 years ago. I listen to NPR throughout the day, read The New Yorker, The Economist, Vanity Fair (the perfume ads drive me batty), and watch BBC World News at least 3 times a week.

I don't like confrontation, so it is unlikely that I will share my opinion about politics with you here in this blog or anywhere else. You will learn all you need to know about my tastes and leanings by having read the paragraph above and then reading the paragraph below.

Because I live with MDH, who is constantly listening to and reading news all day while he's working I'm even more informed. He also checks in with the false gods of news everyday; Fox News, Rush Limbaugh and that irritating Hannity guy. He calls it "taking one for the team", because he likes to also keep abreast of what's going on in the land of ridiculous exaggerations, made up news and endless crazy speculation.

He can't seem to stomach Bill O'Reilly though and won't give his show the time of day.

Anyhoo... what I'm trying to say here is I am aware and informed on most things national and global, but I tend to either get all riled up or bored to death every time I watch the news or read a newspaper with any serious intent.

So while MDH is snug in our den switching back and forth between Face the Nation and This Week with George Stephanopoulos on the TV while he watches Tim Russert on his laptop, and contentedly jeering, I'm in the office reading News of the Weird online. Perhaps the rumors are true and there is nothing but cotton candy between my ears, but I can only take so much news and opinion before I will run away screaming.
Fuck the Presidential Primaries, foreign policy screw ups and climbing oil prices - here are some of my favorite recent stories from News of the Weird.
Police in Mount Lebanon, Pa., said in December that no illegal acts were involved, but some parents still want to know why the nondenominational Christian Mount Lebanon Young Life club had staged a teenagers' social event during which boys wore adult diapers, bibs and bonnets and sat in girls' laps while being spoon-fed. Said youth minister O.J. Wandrisco, the skits were not "dirty," but "to break down the walls and let (the kids) have fun." A previous skit involved, according to a parent, kids eating chocolate pudding out of diapers. [Pittsburgh Post-Gazette, 12-8-07]
Dr. Paul Schum, 50, the principal of the Catholic Bethlehem High School in Bardstown, Ky., was arrested in October on prostitution-related charges after he was discovered loitering in an alley, dressed as a woman, in leather and fishnet stockings and with fake breasts. A local priest, presumably intending to help Dr. Schum, said dressing as a woman didn't sound like something Schum would be involved in, "(b)ut again, we're in the Halloween season." (Dr. Schum eventually resigned, and the prosecutor chose to drop the charge.) [WAVE-TV (Louisville), 10-31-07, 12-20-07]
Mr. Sandy Wong, 45, was sentenced in November in Edmonton, Alberta, to 90 days in jail for three counts of indecent exposure, including masturbating with his pants down while sitting on the roof of a BMW at a local agriculture fair. According to a psychiatrist, Wong said he is sexually attracted to the BMW's roof because "it's curved like a woman's body," but he also has been aroused by a 1967 Camaro, a 1965 Chevy Bel Air, a 2005 MiniCooper and a 1991 Buick Century. [Edmonton Sun, 11-23-07]
A 32-year-old man was found dead, stuck in the cat door of his girlfriend's St. Augustine, Fla., house after she had kicked him out. Said a friend, "(H)is head was caught ... like he was (trying) to reach up and unlock the door ..." [WKMG-TV (Orlando), 11-12-07]
Posted by The Lady Who Doesn't Lunch: at 3:58 PM

Labels: my kind of news

Amen...I am so with you on that. I care about who is going to be the next President, but I don't want to hear about that 24/7.

I am making a mental note to myself to never try to squeeze in through a cat door or mail slot.

I only learn about other cultures to mock their differences, and find out how much I want to f their car designs.

Amen! When I am at my parents I am subjected to HOURS of watching "the land of ridiculous exaggerations, made up news and endless crazy speculation." Your husband is a brave soul.

Oh, I'm with you. Life just gets too darn serious otherwise...

I do not share my lack of politics either..I hate the subject. All of these clowns that are pushing their wares all over the country drive me a bit crazy.

Thanks for reporting news that I can appreciate.

I kinda feel bad for the guy who got stuck in the cat door...

RenWoman - MDH is like a media cyborg - with the TV and the laptop going at the same time. I need to laugh.

Wendy - you are a petite flower who might actually stand a chance of making it through, but has sense enough not to try. I can't imagine anyone would try to keep you out in the first place.

Pistols - Here you are again with another brilliant idea - an international gentleman's club catering to automobile fetish around the world.

Gwen - I don't even have to visit my parents to be subjected to the ridiculous exaggerations and crazy speculation. My dad is prolific with insane propaganda in email and has caused me to put him on my block senders list.

Heidi - Even the ads on the TV news are depressing, it's all about schilling the drugs. Restless leg syndrome is only funny the first couple of times I hear about it.

Evil - it makes me uncomfortable to defend my beliefs - so I just don't get into it.

Chris - me too, but it's still funny. I also feel sorry for the woman whose home he was trying to invade and her cat too.

Sean Hannity is the one guy on TV guaranteed to turn me green and start busting out of my clothing in about five seconds. Sanctimonious assmaster. He and O'Reilly should do a show together on a boat then someone should come along and blow the shit out of that boat. I'm just saying. Hi there FBI! Hi! I was kidding. Well sort of. OK not really.