iPod You Said We Were Through

So here's a little update to the iPod drama. After spending about an hour in a nightmarish link-loop on HP's support site where I click a link about ordering a replacement battery and that link sends me to a page about how to lengthen the life of your battery, and so on blah, blah. I finally googled "replacement iPod battery" and came up with a site that sells exactly and only that. For just a little over $25, including shipping, I got a kit that includes a battery, 3 special tools and elaborate instructions.
I have always wondered how the hell you would change the battery of an iPod because the body of the contraption is completely seamless and there is no little clip or switch or thumb-pad that would make it appear at all possible for it to ever be opened. Needing the battery replaced has always been something that I simply tried not to think about.
The replacement battery kit arrived in the mail on Thursday at about 2pm. I laid it on the dining room table and left it untouched and separated from the rest of the mail which I also placed on the dining room table. I walked by it a few times as I went about my day, eyeing it warily, poking it with a stick. I finally decided suck it up and at least read the instructions at around 6pm.
It seemed harmless, at first. I mean, how hard can it be to change a battery, right? The package contained the battery, of course, and 2 little green Teflon tools, a tiny, tiny screwdriver and the instructions folded tightly on thick, shiny paper. As I unfolded the instructions my first thought was, "Jesus, this is one huge piece of paper, it probably has instructions in 10 languages." My next thought after the unfolding was complete was, "Okaaaay. These instructions are all in English. Shit, man. That's a lot of steps (16 in all). At least there are color pictures."
I stopped abruptly and quickly refolded the instructions and jammed everything back into the package, after reading step #9 which literally says:
"If you are lucky, the battery will come loose with a "snap". If you are not lucky, you may need to use a hair dryer to heat the battery up to get the glue to loosen it's hold. Good luck!"
I'm not kidding about this. Those are real quotation marks around a real quote from step number NINE of SIXTEEN (16!!) steps of instructions on how to change a fucking battery. The end of instruction #9 says Good Fucking Luck!!??!!
Last night after dinner I asked MDH if he would help me with the task of changing the battery. Of course he agreed and we turned on all of the lights in the den and began our journey. Step one, no problem. "Begin by placing your iPod on a soft work surface". Arm of the sofa works just fine.
Step Two is all about using one of the tools to create an opening to get the shell off. "Don't get discouraged", it says. Well, it was discouraging. He and I took turns. One of us holding the little tool, the other trying to twist and gently bend the iPod to create the slightest gap for the the tool to slide into all the while trying to heed Step Two's warning not to slip and cut our hands with the little tool. I was freaking out thinking that we have one chance to get this right or all will be lost. As if we were trying to diffuse a bomb. 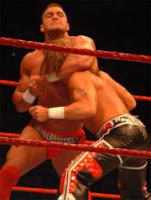 After what seemed like an exhausting 30 minutes and turned out to be 2 minutes of working together on Step 2, I was ready to give it up and ordered MDH to stop. He was determined however to carry on without me and refused my direct order. This made me get whiny and start crying. I began to pry the iPod out of MDH's hand like a 4 year old, he pulled it back toward himself until we were in some kind of asinine tug-of-war. This exchange began to freak me out even more.
And then it happened. As we were pulling and tugging I noticed the iPod had changed. "WAIT!!! Stop! Stop! Stop! Let - Go - of - IT. There's the menu!!!"
Somehow my iPod was magically cured and decided to start working again. Somehow the twisting and pulling made it work again. Somehow it needed a chiropractic adjustment. Thank god, because MDH and I would've definitely killed each other before we ever made it to step nine and the hair dryer.
Posted by The Lady Who Doesn't Lunch: at 12:58 PM

That all sounds like my worst nightmare. I'm glad you got it to work, though.

Hi Nice Blog .I've made up my mind: I'm gonna buy an MP3 player. I just don't know which one. I like the ipod replacement battery, but do I really need something that small?