Ever since middle school, when I fully began to grasp the concept of homosexuality, I have prided myself on my excellent gaydar. Not that I haven't ever been wrong, like the first night I met my friend Nature Boy, I totally thought he was gay, but in my defense he is very good looking, almost pretty you might say, into art and at the time had longish hair that was being held back away from his face by a headband. Oh, and I was drunk.

Over the years some of my good friends have been gay so I guess that this makes me feel entitled, however mistakenly, as if I have some kind of connection to gayness that has made it OK for me to immediately peg a man who works several cubes down from me as being gay. He's not overtly gay and no one that I work with in such a conservative workplace in such a conservative city is openly gay. This guy is very manly and if he were straight and I wasn't married I would be all over him.

Anyhoo... I was delighted to find this gay man at my place of work because I feel, even though I am not gay, that gay people are my people. I get it. I'm on their side. I feel their pain. I've danced in their bars. I've voted for their civil rights. I've seen Queer as Folk.

I'm sure that gay people have no idea that I feel this way about their gayness, but since we work together (and he is so cute) I want this gay man at work to know that I am totally gay friendly, so I began to send off little cute signals to this man so that he would know that I knew that he was gay and that it is totally OK with me.

This man is not someone that I have a lot of interaction with, so the cute little signals I give off are limited to things like smiling really big whenever I see him in the hallway or lunchroom and giving him the occasional eyebrow raise or knowing wink whenever there is a cute guy around. As if to say, "Yeah, baby I'd totally tap that and I know you would too!" I also call him by his longer full name rather than the shorter more masculine name that everyone else at work calls him, like David instead of Dave. And when I see him and say his name I say it all high pitched, sing songy and girly - like "Hiii Day-Vid".

In short, I treat him just like one of my gay friends. He eats it up and gives it right back to me. 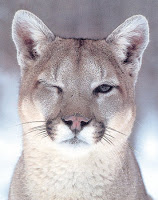 Well I'm a big giant idiot because I just found out this guy is into chicks and now he probably thinks I like him and am some kind of chubby cougar.

He's not gay and I'm an idiot.

I'm a big flirtatious, over the top, winking idiot. I found this out because he stopped by my cube yesterday to ask me how old one of my female co-workers is and whether or not she was attached because he thinks that she is really cute and might want to ask her out.

It took me a minute to get over my shock, but then my gaydar started to pulse even harder as he crossed his legs at the knee, leaned in closer to me and then proceeded to dish the juiciest workplace gossip I have ever heard, and let's face it the man has a certain je ne sais quoi and he smokes Newport Lights.

That may be as gay as people are allowed to get in Grand Rapids.

Belated Happy Birthday wishes too. I see I have a lot of posts to catch up on reading.

Maybe he is on to you and is just trying to mess with your head!

I don't think you're alone in the "confused" department as sounds sounds very similar to one half of my favorite boy couple.

I feel a certain ownership of the gays, too, and cavort just as ridiculously around them.

Question: Did you say anything to YDH about the billboard? Because they changed it on Thursday. It was spooky. I'm impressed by the power you wield so effortlessly.

"he sounds" not "sounds sounds"

Oh Lady, I just luuuv the gays too!! Much to the chagrin of my older, ultra religious and conservative co-workers. You should have seen their faces the day I asked if any of them had heard of "fisting"..oh.the.hilarity.

Maybe your co-worker is Bi..ya think??

Perhaps he's on both teams? My gaydar didn't kick in till after college. During college, though, I had a huge crush on a guy in Spanish class. Then one day while talking to a friend, he came up with another guy and told my friend "Did you hear? We're engaged!" Huh! Surprise!

As Seinfeld says, "Not that there's anything wrong with it!"

Well...maybe it is trying to throw you off because he doesn't want anybody to know that he is gay. Maybe he hasn't embraced his gayness. Or maybe he just wants to see if you will continue to flirt, wink and entertain him. I'll vote...he is gay.

Sounds like my brother-in-law. I don't care that he's married with 2kids and lives in a nice big house in one of the top 3 places to live in America. My gaydar still goes off. Not that there's anything wrong with it.

Yeah, I had a problem with flirting wildly with an "obviously" gay guy just for the fun of it, only to find out he wasn't gay. He was also very difficult to get rid of after all that flirting.

I've never really known how best to express my raging passionate opinions and involvement with the gay community and gay rights before, since people understandably look at me and wonder, "But isn't she straight?" When I read your second sentence, I just totally connected with it.

Anyway, I have three or four people (okay maybe five) that I know of where my gaydar goes off instantly. They may all be married with children, but I'm not buying it.

Dan - you'd be surprised, but you're right, most of the gay folk I've met here are very low key and NEVER come out at work.

dmarks - Hi and Thanks! I've been away but posting like mad while my husband is out of town. I need to catch up on yours too!

Skydad - I can only hope that he thinks I've got a facial tic.

Gwen - I will restrict my "cavorting" to the gays from now on to only those who are card carrying and have been officially confirmed.

Answer: Yes I did. In fact was on the horn with him within 10 minutes of reading your post. He said something. Things transpired. Bingo - your sign is down.

Linka - I'm still in shock so the only thing that I think is that I will limit my interaction with him to my normal professional unflirtiness.

Tara - my gaydar is usually spot on, but I have been wrong before.

RenWoman - yes, but that is the whole point of my crazy flirting - to let him know that I know that he's gay and that I'm OK with it. Now he probably just thinks I'm over sexed.

Michelle - I've never said so here on my blog, but I really think that my best friend Amy's ex-husband Assface is secretly gay. He has always sent my gayar shooting off the charts. I think the denial of it is why he is such a miserable assface.
Amy thinks so too, so it must be true.

Wendyb - my only saving grace in this situation is his interest in my co-worker.

Fawless - I'm not sure anymore, but we'll see. I was totally joking about the Newport Lights BTW.

but as a gay man, i think you shouldn't be a geek about it. no more winking HAHA.

Player - From now on only at you kiddo.

Pistols - Well this town IS very religious. There are 3 bible colleges within spitting distance from my house.

Del-V - I have that too only I call it "wig-dar", cause in addition to toupees, I can spot wigs and extenstions from a mile away too. I usually don't go around winking and flirting with these people however.

I have given up trying to pick them these days.

Does he live alone with his two cats named after any given Broadway characters?

Maybe he is throwing up a chick beard just to mess with you. maybe he feels you have gotten too close.

A lot of my parent's friends were gay, so I had gaydar before I even knew what it was. When I lived in San Francisco, almost all the guys who worked with me at this one restaurant were gay, and they treated me like their little sister. It was so sweet and safe...Until one of them hit on me and it hadn't even occurred to me until then that any of them could have been bi. Duh.

you know what, there's this guy I went to dinner with, I thought he was gay. but then he kissed me and he is very heterosexual. very strange and confusing. You are a total riot. nice to see you again!

Ok, so it's easy to troll your 'chives because you have that coolio "here are my most important posts" section or whatever you call it. Anyway, HAD to read this one when I saw the title. Doesn't matter if he's gay or not -what's important here is that you go out of your way to help make it a friendly place for the gays (no matter how, um, unusual your approach may be) and for this we thank you.