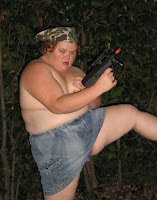 Hey! Today marks the one year anniversary of my first post on this blog. I knew it was coming up but I didn't realize that it was today. I would've planned for something special, but alas, I've got jack shit to talk about today.

Instead let me just say thanks to all of you who bother to come here and read my crap. Thanks guys!

When I started this blog I was 2 months out of work, living in a city where I didn't know a soul, and had a head full to bursting with random thoughts that had just been rolling around in there for years with no where to go. There have been some times when I have doubted the wisdom of spilling my guts out on the internets for random strangers to read and wondering if I shouldn't just keep my trap shut - and then you people started leaving comments. And I liked it.

At this point I can't imagine there is any topic about my personal life that I haven't covered on my blog, but just in case I thought I would steal an idea from one of my favorite bloggers Gwen and leave the comments open for your questions. Ask me anything I promise to give the most honest answer possible without naming real names. Following Gwen's example I will choose 20 questions.
The title of this post and photo at the top (No - it isn't me - so don't include that in the questions, asshat) are totally random and unrelated to anything in particular. They were sitting unused in my "blog fodder" folder. I had been saving them for a rainy day and so far haven't come up with a reason to use them in a post. Maybe Fawless can use it in her Monday caption contest someday. There you go Fawless, Happy Birthday!, don't say I never gave you anything.
Posted by The Lady Who Doesn't Lunch: at 6:12 PM

Happy anniversary. Mine's tomorrow (my blogversary that is). I'll try to think of a clever question but I just accidentally inhaled a lot of paint fumes and feel brain dead now.

WendyB - Happy Annivesary to YOU then! You will probably have more appealing photos on your anniversary blog post I bet.

As for the question - whenever - it's cool.

Damn it - I missed mine. Now I have to go look and see when it was. I'm sending you paper for your anniversary. 1 or two ply?

Let's see...what have I always wanted to know about the Lunchless Lady? How come you're always so freakin' funny? Well that is almost a sarcastic kind of jealous question.....but there you go :)

Please tell me the best STD story your "friends" have ever told you. Wait, that's not a question. Can you make it one? That's a question.

My work here is done.

Congrats Lady!!
Hmm..thinking of an inappropriate question...oh! Have you ever taken a photo such as that for your husband (or any man for that matter)??..sadly, I have..hopefully it won't end up on the innurnets.

Happy anniversary! I forgot to celebrate mine...darn it! I missed out on paper presents.

Okay..questions...If you could go back in time and relive one day which day would it be?

Awww, I'm blushing. But I got you back by gushing about you over at my place today. Snap.

Congrats on your one year!!! I love it here.

Wait! I forgot to ask a question.

Are you particular about the direction your toilet paper goes on the roll? You know, the end of the paper on top of the roll vs. on the bottom of the roll?

Hang on, I've got one more.

How did you and YDH meet?

Question: Where's the best place you've ever traveled to and why?

Congratulations! Mine is coming in August, not sure what day. The title is so great that you had to use it, appropriate or not.

Question: What cosmetic/skin care/hair product or products are you currently obsessed with?

Hmmm... A question, eh? Hmmm... Okay, what's your favorite drink recipe? I have a new blender, you see, and not much imagination. I needs help.

Congrats on your anniversary. I'm glad you're here.

What would be your dream vacation if you could go to a place you've never been before?

congrats to hitting a year. hope you continue to enjoy blogging.

HAPPY BLOGIVERSARY! What a spectacular week this is, I tell ya..

And I would use that picture, but unfortunately I have a strict policy of not posting pictures of myself for my Monday's Caption.

That was when I was really into target shooting. Nude.

Happy anniversary from the pin-curl lady! Where exactly is the crotch of your pantyhose when you finish work for the day? Is it in the proper spot, or has it made it's way to your knees? Or do you prefer to wear knee-hi's with long, flowing skirts?

Have you ever, by accident or on purpose, set a mailbox on fire?

It's me again. Have you ever set yourself on fire?

Have you ever had to explain why sanitary napkins were strewn in someone' backyard?

I was just wondering if you ever had a homeless person sleep in your car?

I'm begginning to think the anonymous commenter knows you. And likes to embarrass you. And is named Mike L.

Congratulations! I'm almost rounding that sweet sweet year one base as well. Mmmmmmmm......