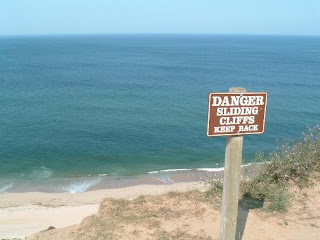 MDH came home from Texas on Friday only to leave me here all alone again this morning.

I don't mind. Go my darling. Have fun.

Yes. He rented a car and is driving to Cape Cod. Without me. Go my darling. Have fun.

I don't mind because first of all, that's a long fucking drive and quite frankly I've had it up to here with traveling (envision me holding my arms up to the ceiling, but not too close to the ceiling fan), as we have already been on 3 long weekend jaunts in the past 5 weeks.

Secondly, this trip to Cape Cod is occurring during week days and I have to work.

Thirdly, MDH is going to sleep on the sofabed of the cottage my brother-in-law Syracuse has rented for the week in Eastham. As glorious and high-falutin' as that sounds, I don't sleep on sofas, even if they do have the word "bed" tacked on at the end.

Now, to be totally honest, the real reason that this adventure is wholly unappealing to me has to do with my unsavoriest of brothers-in-law, Knucklehead, who has for the past several months been safely tucked away, enfolded in the gentle, loving arms of the Massachusetts penal system. 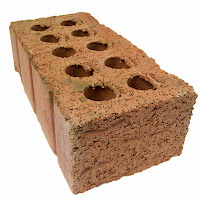 At first MDH and Syracuse were not worried about inviting my mother-in-law to the cottage because Knucklehead was otherwise occupied making license plates. But then after the plans had been made and Ma was already invited, Knucklehead was somehow released, all charges, having something to do with beating a co-worker senseless with a brick, dropped. He was now running loose once again in the world. At any rate he was back to using Ma's tiny apartment as a flophouse and she cannot be invited anywhere, let alone to a beach vacation by her other sons, without being upset if Knucklehead is not also included on the invitation.

So as much as MDH and Syracuse would have liked to treat Ma to a nice couple of carefree days at the beach it could not be done without Knucklehead bumming along for the free ride.

Then a miracle happened. Knucklehead, within no less than a week of his release from the pokey, was arrested and jailed yet again for beating someone senseless. I think it was someone different this time and I'm not sure if it was with a brick, but whatever it was I've never seen one family (minus Ma) so excited to have one of it's own behind bars. This time when Ma called around crying for bail money, nobody was putting up. 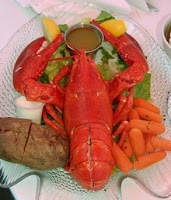 MDH and Syracuse were gleefully back to high spirited vacation planning. It was going to be great. MDH would drive to Boston to pick up Ma and then drive her up the Cape for a fabulous 4 days of relaxing on the beach, eating steamed lobsters and quality family time spent huddled around the TV watching the Red Sox.

Last Saturday however, a scant week before Cape Cod go-time, Knucklehead was released yet AGAIN !

At this point it is too late and let's face it you can't uninvite your Ma from a trip to the beach now can you? Well, if it were up to me I could, but I have chosen to distance myself from this situation by having said no from the start.

In Knucklehead's defense, after the moaning and grumbling from MDH and Syracuse about how he's such a free loader, Ma has offered this delectable tidbit - that Knucklehead will pay for all the food for the trip with the food stamps that he has been collecting and unable to use since he's been locked up. Fabulous. Wonderful.

How this is supposed to make up for the fact that my darling MDH is now going to be sharing the sleeper sofa of the cottage with Knuckehead, a deranged and dangerous criminal, instead of me, a person who has never been arrested for any crime or beaten up anyone with a brick (as much as I have wanted to I was able to restrain myself) and has never once threatened to kill him in his sleep however loud his snoring was, I have no idea.

So this is what I'm missing out on. Go ahead my darling. Have fun. Without me. Just don't turn your back on this guy or leave any sharp objects or blunt ended building materials within his reach.
Posted by The Lady Who Doesn't Lunch: at 12:28 PM

And definitely sleep with one eye open.

Sheesh! What an anti-vacation he's going on!

hey guys, lets all see if we can stay awake the ENTIRE TIME WE'RE HERE!

hahahaha @ I am playing outside.

Sounds like the family tree needs some pruning. Or just a well-directed lightning strike.

Holy Crap! And I thought MY b-i-l (the village idiot, not the maybe gay one) was an asshole! I'd stay home, too.

Saying no was the best thing that you could have done! I'm sure MDH will remove all potential weapons before doing anything else.

I'm just cracking up over "Knucklehead."

I can't believe he's going. In fact the ONLY reason he is going is that now that mother has been expecting him to drive them so if MDH doesn't go then she can't go.

If backs out because of Knucklehead then she will give him no end of grief.

Fawless - the Mass judicial system seems to let us down every time. Maybe I will start praying to Thor.

Michelle - I don't know why they are surprised at these turns of events - I predicted it and am having a lovely, violence free evening here, safe at home.

RenWoman - it's difficult with the master enabler around, aka my mother in law.

WendyB - what else can you do with a guy like that? You have to laugh.

Tara - sorry Tara, forgot to type your name in front of my comments.

Remind me not to ever invite Knucklehead to my "brick" rancher. Family - what can you do about them excpet scream, cry, change your name and move to a different country in the middle of the night. Uh, em, or so I've heard.

he best be careful sleeping on that sofa bed....

Wow. You know what I liked best about all our family vacations? The lack of brick-based assaults.

Still, I am thankful that you are there in spirit to chronicle the shenanigans and help us laugh. A lot.

Maybe Knucklehead will get picked up on a weapons charge or something before they go...but if not, you'll definitely have a better time at work.

I'm just pondering what kind of delicacies he can get with food stamps. I hope they have an alternate food plan.

By the way...your post about the blizzard made me dream about thin mint ice cream! So last night I got in the car and drove to Dairy Queen. So good...thanks for the suggestion.

Suze - You'll get off scott free (whatever that means) as long as you don't invite my mother in law. Once you invite her Knucklehead is sure to show up for the free eats.

Evil - he's a miserable human being and that sofabed - I can't even think about it.

Pistols - his family makes me like my family all the more. Glad to make you laugh.

CDP - I'm amazed this hasn't happened already, and am wondering if maybe Mass doesn't have some kind of strict gun laws that have prevented such a tragedy.

Gwen - you can buy anything with food stamps as far as I know. I once saw a man buy a 3 pound bag of frozen shrimp and a giant jar of cocktail sauce with them. Maybe not booze - I'm really not sure.

Boy, that's some DNA you husband possesses. It sounds like his brother may have gotten all the bad recessive genes.

driving to Cape Cod?!? with gas prices the way they are, wouldn't flying First Class be cheaper?

Oh my god, stay home and enjoy the peace and safety!!! And, he scares me! The way you describe him in this post is priceless...foodstamps! Priceless.

He sounds like pure evil! Did your hubby pack his tazer?