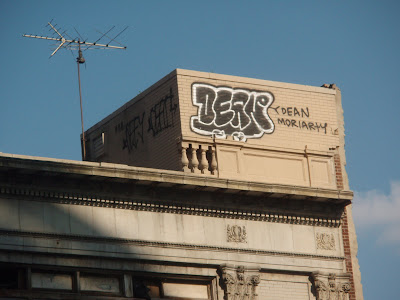 When I decided to steal Gwen's 20 Questions idea I was expecting a slightly different outcome. First of all, I thought for sure there would be a slew of raunchy inquiries about my sex life and B, I thought there would be many more inquiries in general. I was a little let down until I tried to answer the STD and pick-up line questions posed by Pistols and realized that I am sadly lacking in the kind of bawdy material that would have made the asking and the answering of such questions worthwhile.

I was more pleasantly surprised by the number of questions you asked pertaining to travel adventures. There were enough of them (well all right, there were only 3, but still) that I decided it would be appropriate to save them for this travel-themed edition of 20 Questions.

Those of you who may have been reading my blog for awhile know that I used to travel extensively around North America for work and also that the primary source of delight in my personal life is traveling just about anywhere with my husband. It's what we do, so I know a thing or two about a thing or two when it comes to travel.

Where's the best place you've ever traveled to and why?

This is a tricky one because I rarely have a bad time anywhere. Also I've been so many places it's hard to nail it down to just one best place. So true to form I'll break it down into two separate categories, the United States and abroad, thus causing the answer to this question to be much windier and wordier than necessary. 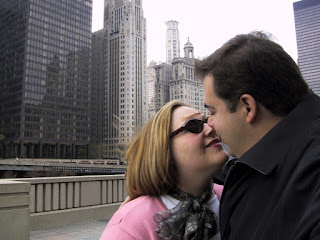 United States: I love Chicago. We are one quick train ride from where we live (Dullsville) and boom - big city. We try to mix it up and focus on different neighborhoods when we visit, see live music and eat ourselves silly. Chicago is great because it's familiar and yet a completely new experience every time we go. 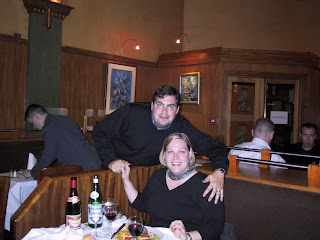 Abroad: I love Paris. I've been twice, once when I was a teenager I was there for a couple of days and once with MDH for our honeymoon when we stayed for an entire week. I would go every year if I could. It's the best place in the world to eat, drink and people watch, two of my favorite activities. I realize that that is 3 activites, but I didn't notice my error until I had already hit the publish button.(Here's a photo of our last night in Paris, wining and dining it up.)
Churlita over at Churlish Figure, another of my long-time blogger friends, and the first blog I ever put in my Favorites folder, by the way, asks:

What would be your dream vacation if you could go to a place you've never been before?

I've always wanted to go to Portugal and the Azores. Well, not always, but since I met MDH because that's where his family is from and also because before I met him I didn't think it was possible to meet someone who wanted to travel as much as I did. Prior to that Portugal was not even on my radar. Anyhoo... I love the idea of his exotic, ethnic background and the fact that his family has an "old country". We'll get there someday. It's on the agenda.

One could argue that my family has an "old country" too, but I've already been to Kentucky several times and it's just not the same.

Speaking of travels to exotic lands, this next question is from the only regular reader that I have in a foreign country (that I know of - otherwise reveal yourselves!), the lovely lipped Australian, Sparsely Kate:

Have you ever been on a plane with terrible turbulence? What is the worst air plane experience of your life? What flight was it, where were you going and what happened?

Sparsely the answer to your first question is yes, I've experienced terrible turbulence, but after so many years on the road, during which time it was not usual for me to be on up to 6 flights a week (that's including stopovers folks, so don't get too excited), I have become jaded. It's true, I am entirely unfazed by turbulence. Typically I fall asleep as soon as the engines start up and the plane backs out of the gate. Something about that low, constant humming is as good as 2 Ambien and a lullaby to me.

I do, however, remember once being sharply awakened by the screaming of the other passengers during a particularly bumpy red-eye while coming home from Phoenix. I hazily looked about and after establishing no sign of flames, box-cutter wielding terrorists, or that the little oxygen thingys hadn't popped out of the ceiling, I rolled my eyes and went right back to night-night time. Totally jaded.

The worst airplane experiences for me have nothing whatsoever to do with the flight itself and more to do with a lack of tolerance and over all bitchy attitude toward the more dim-witted of my fellow travelers. You can read about it here if you like.

In case you were wondering, the photo at the top is for Evil-E over at Random Crap, another long time blogger friend and constant cataloger of random graffiti. I took it for him on our trip last month to Philadelphia. I meant to post it last night, but MDH was hogging the office and I couldn't squeeze in long enough to make it happen. Better late than never! Anyhoo... looks like Dean was either outed by another tagger or became a little unsure of himself and decided to add a more readable signature to his handiwork.
Posted by The Lady Who Doesn't Lunch: at 6:01 PM

Is this the part now where you entertain us with stories of past sexual deviance?

That would be fun!

I always wonder when I see one this high up; how did they get up there and not get noticed while doing it?

Excellent. I love the clarification this character added. Question being, of course, did someone else steal the original Dean's idea by adding the name afterwards? Also, I like the little bracelet thingy that wraps around the bottom of his name.

Good work, I appreciate the effort for sure.

PS, I cannot figure out what the one on the side says. I enlarged to check it and still nothing.

Poob - that's what I thought too - only nobody asked those kinds of questions (including you dude). Although, like I said, in reality I've never been all that deviant.

Evil - I knew it would be right up your spray painted alley.

I always figure it's rude to ask married women about their sexual pasts, because dudes get weird about that kind of stuff. Also, usually asking that question makes you a weird dude who doesn't get laid a lot.

So I stick by my questions, though I should have asked, "Who's the easiest friend of yours and how many drinks would I have to buy her?" Damnit, Pistols, you finished too quickly...which this friend will learn all too soon.

You know, you are really working me over with all the romance stuff. I'm starting to think a boyfriend might not be such a bad idea, or at the very least a nice fall accessory.

Thank you for answering my query. ;) I've always wanted to use that word. Anyway, I'm envious, I've never been to Chicago or Paris. Not yet, at least.

One of the most turbulent flights I remember was coming back from Phoenix, too, only the harsh weather was actually over Ohio. I was quite nervous.

You and your husband are both absolutely adorable. Wow! I was going to try to make a smartass remark, but I am too bowled over by your beauty and refinement!

I sort of feel like I need to dress up a little bit before I read your blog.

please don't post another of these 20 questions things. thank you :P

Pistols - I'm sure my husband would be charmed by the chivalry of limiting the topics of your questions to VD and pick-up lines.

Gwen - Honey, do whatever you think is the right thing to do. I get all worked up about the romance-y stuff and sometimes forget what a pain in the ass dating can be.

Tara - Chicago is easy - I bet there is some kind of train from Cleveland - I know there is one from Toledo.
I lost count of how many times I took that red-eye from Phoenix. It's always bumpy.

Fawless - thanks for the compliment but bowl yourself back upright - those pictures are 8 years old and we somewhat less refined and cute than we used to be. These days I'm all sweat pants, Kraft mac'n cheese and bad attitude.

Player - I'm sorry to hear that you are disenchanted by the 20 questions thing. Right now it's all you get. I'm clean out of fresh new ideas.

You have inspired me...I want to travel more! I want to have so many great experiences that it's hard to answer that question. Thanks for sharing.

Thank you for answering my question! and I do love your travel posts...

you would hate to travel with me on an airplane, I am so hyper vigilant that every bump and shudder I am looking fervently around trying to establish if anyone else was freaked out.
ooooh air turbulence, I can't think of worser things about travel and yet I know rationally it's just so silly - they are only air pockets, like bumps in the road.
Still, I love my feet to be on the ground :)

i hear the word "Azores" and i just start to laugh...

I love Portugal and I once actually threw up on a flight to London due to turbulence.

"Oh how fascinating, Guv, because this entry was all about YOU!"

Loved your previously posted travel blog.. I do think I met most of those twits on this past trip. And really, CHICAGO? maybe I should rethink my pooh-poohing of the AWP meetup there next JAnuary.

Travel it up sista! It looks good on you! The leisure kind of travel not that boring I have to travel for work kind of thing.

That's a great pic of you two in Chicago.

All this travel stuff is making me want to go somewhere now.

I love the 20 questions idea, I am trying to think of a good question. I know you have some good stories and I am just trying to think of the right question to have you share one. Although, when you talked about how you met YDH you forgot my favorite part, that venus told him to ask you out. I love that.

Are you going to regret that I read your blog? :-}