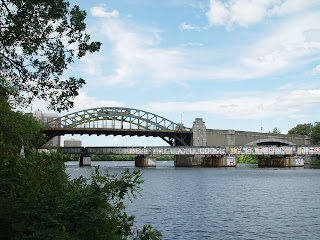 We are going out of town again this weekend. This time headed for Boston. Well, Cambridge really to celebrate MDH's grandmother's 100th birthday. It will be the first time I have ever seen MDH and all of his brothers together in one room.

MDH is the youngest of 5 boys raised by a single mother. You could play that song "One of these things is not like the others" to pick MDH out of a line-up with his family. They all have, in varying degrees of intensity, an element of thuggishness and one of them is an outright thug. MDH is the least thuggish. 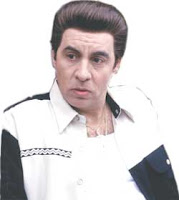 Miami, in his late 50's, is the oldest of the brothers. He's a construction foreman who has never married but has grown children from unplanned pregnancies in his youth coming out of the woodwork. Miami is very family oriented and feels bad that he wasn't there when these kids were growing up so includes them in every event. He calls everyone in the family like clockwork every Sunday.

He is big into sports betting and drinks a lot. He likes to show off and show people a good time but is very demanding to waitstaff in restaurants which makes it difficult to look forward to dining out with him. He gets belligerent if the restaurant doesn't serve Sambuca with a coffee bean in it. He's a bachelor, a traditionalist and a loud boozy blowhard, but his heart is always in the right place. He violated his probation to come to our wedding.

Las Vegas is the postal worker brother we visited recently. He has 3 boys still living in Massachusetts with their mother. Before he moved to Las Vegas he was the primary looker-after-er of Nanny, stopping in at least once a week and doing all of her shopping for her. He may be my favorite of MDH's brothers. He's chivalrous, kind, sentimental and takes great joy in life's simple pleasures like laying around the pool at Caesar's Palace, red wine and thick steaks. He's laid back and a lot of fun to be around. He's also big into sports betting. He brought a date to our wedding. 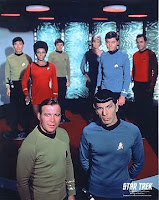 Syracuse is the brother we have spent the most time with. He came to our house for Thanksgiving last year. He's kind of a geek and into computers so he and I have that in common, but that's where it ends. He is a huge Star Trek fan. He also talks about inappropriate things, like how hot Asian women are or what a bitch his ex-wife is, in front of me and his 16 year old daughter. He's one of those guys that says everything at the top of his lungs so that everyone can hear how clever he thinks he is. I will never think a story about how he cussed out a telemarketer is funny. Whatever it is you are discussing he is convinced he knows more about it than you do. Even having said all that, I don't dislike him. Not in the least. He's kinda funny and a terrific father. I adore his daughter. They drove to our wedding all the way from Syracuse.

Knucklehead is 3 years older than MDH and his polar opposite. He's missing teeth, brain cells, moral fiber, and money for bail. He is completely charm-free. He scares the shit out of me and I have asked MDH to never leave me alone with him. Ever. He was not only not offended by this but agreed that it was good and sound judgement. He has been especially destructive to MDH's mother who calls everyone crying and asking for bail or money to pay Knucklehead's attorney. He is 46 years old and lives with their mother in Cambridge in her tiny retirement community efficiency apartment. He's not supposed to be there and could cause her to get kicked out. In fact everyone is waiting for it to happen. He was invited but chose not to attend our wedding because no one would pay his way. He did not RSVP.

The whole situation and thinking about all of them together makes my brain hurt. 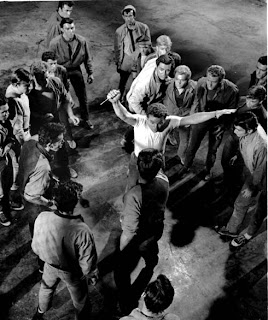 The last time all 5 brothers were together Miami and Knucklehead got into a big fight and Knucklehead came after Miami with a knife and threatened to kill them all in their sleep.

Miami is the one that has organized Nanny's party. He's an over the top grand gesture kind of guy so MDH has had to remind him several times that it's a party for a 100 year old woman and should really be kept low-key. Especially because Nanny herself has declared that she "hates a fuss", meaning loud music, noisy children and too much commotion. Miami has been calling us at all hours with suggestions for the party and to make incoherent demands. He's invited Ted Kennedy apparently. No one has any idea why.

There is a possibility that Knucklehead won't show up and in these situations that means Ma won't show up either in protest of the terrible way her other sons treat him.

I know this about Miami: he is one of those guys that always has a hidden agenda. You could be giving him a ride to a party and he'll ask you to stop at the bank on the way, and then he'll remember that he's left his bank book at his friend Mikey the Cat's house and would you mind waiting outside in the car while he runs in real quick to get it. Thirty minutes later you'll knock on Mikey The Cat's door only to discover from Mikey's mom that Miami and Mikey have left for the Tavern through the back door. Three hours later Miami shows up at the party pissed drunk and pissed off with you for leaving without him.

Or, on the other hand, Miami is likely to rent a Corvette or some other show-off impractical type of vehicle and then expect us to cart around everyone in his entourage since there's no room in his car.

Miami once invited MDH to the Sugar Bowl or something in New Orleans. He flew down there only to find out minutes before the game that Miami didn't really have tickets. So we're not even 100% certain a hall has been rented, etc. There may not even be a party.

Between Miami and Knucklehead you don't know what can happen, but it's guaranteed to be either annoying or life threatening.

I'm telling you all of these things in preparation for the post I am anticipating writing when I get back. I can't wait to see how it all shakes out.

UPDATE: 11-01-07 5:16am (Couldn't sleep anymore.) Syracuse called last night. Seems Miami is planning a big night out with the boys (his brothers, sons and hometown pals) on Saturday after the birthday party and thinks that I'm going to babysit all of the children. He just assumes I will do this? He has never been more wrong.

That's not why I couldn't sleep. I mean it's irritating and rude, but not worth losing sleep over. I just couldn't remember whether or not I paid my student loan payment this month. I did. Of course I did.
Posted by The Lady Who Doesn't Lunch: at 12:31 PM

ALl I have to say to this is: Yikes!

That, and Good Luck.

With grandsons like those, how did that poor woman live to be 100?

From your descriptions of the motley crue, I am torn between Las Vegas and Syracuse. Like Las Vegas, I too enjoy a steak (the bloodier the better) and wine. But a guy like Syracuse could really boost my self-esteem by telling m I'm a hot Asian.

My guess as to why Ted Kennedy was invited is alcohol related.

Godspeed Lady Luncher! May you return unscathed to blog about it.

Cherry - hey! Welcome! No kidding - I'm planning to stay out of the way and hang out with Nanny and Syracuse's daughter most of the time.

Hi Step - They are all single and looking... I strongly recommend Las Vegas he is the nicest man. Syracuse is very bitter.

"I can't wait to see how it all shakes out."

Stepping Over the Junk said...

HAVE FUN! Come to my open studio if you are still in Boston on Sunday evening! (I live on the north shore)Have a great time!

oh my lordy, you certainly did get the pick out of the bunch.

after reading this post I am sincerly glad for my boring, small family.

it must be hard for you to watch...drink lots please.

Heidi - it should be very interesting.

Stepping - I would LOVE to but we're leaving on Sunday. We're planning to tool around the city tomorrow before everyone else get's into town. I'm hoping to squeeze in a dinner at The Elephant Walk and go to Brookline for bagels.

Betty - I plan to stay sober so that I can more easily keep one eye on the door. My family is pretty free from drama too - so I find his family endlessly fascinating.

Whoa, he just volunteered you to babysit? How...er...nice of them. My brother volunteered my tiny apartment for a Thanksgiving gathering one year. It was my first year in the place. I was mad that he did that without asking, but then it turned out to be really, really fun.

You should talk to these guys about ways to dodge loans.

Tara - I might feel differently if I have ever actually met any of these kids.

Pistols - I'm sure I could learn a lot from those boys but I'm also sure I don't even want to know. Everything in Miami's apartment "fell off a truck".

You could really write a screenplay about all of this.

You could sell it for millions.

Churlita - somebody already beat me to it, it's called Southie, except the characters in my screenplay are Portuguese.

Holy shit. They should give out awards to that lady for living that long. In the UK the Queen sends you a telegram! Honestly! You're probably aghast that the Queen would go to such trouble but I'm aghast that there are still telegrams.

The photo you used for "Miami" made me choke on my (now lethal) Diet Pepsi. That's Miami alright. Meets Italy. Too funny.