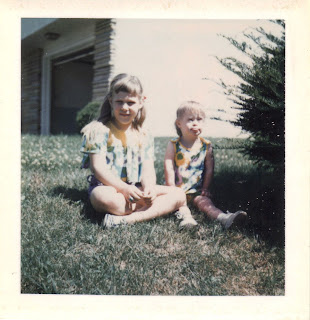 Today's post requires you to know 4 very personal facts about me.
1. I am adopted. My mother, who I bitch about in many posts, although I love her awful, is not my biological mother. My father is my biological father, but the woman I refer to as my mom legally adopted me when she married my father. Dad and I were a package deal. I was 2 when they married and went on their honeymoon with them. That previous sentence is not a fact you need to know for this story, it's merely a cute tidbit of Lady trivia...
2. My sister, the daughter my father and adopted mother had together when I was 3, was born with Down's Syndrome. She lived to the age of 15 (due to the many heart problems that can be part of the "syndrome") but until her death remained intellectually somewhere between 3 and 4. My parents had genetic testing done after she was born and were told that they would never have a "normal" child together. So my sister and me were it for them, kid-wise.
3. Today it's nearly unheard of, but in the 70's it was not uncommon for children with "defects" such as Down's Syndrome, Cerebral Palsy, or Autism to be institutionalized. There was much turmoil among our extended family because my parents chose to keep their child at home and raise her themselves with as much outside help as was available at the time. My sister was never hidden away or a source of shame as some in our family believed she should be.

4. My sister was the joy of all of our lives and made every day worthwhile. Eventually even the malcontents in the family were won over by her brand of crazy loving charms and all of people who had argued for her to be sent away ended up apologizing to my parents sooner or later.
And now on to our story...
My parents had only slightly different expectations for each of us. I was expected to be smart, pretty, and nice, in exactly that order. My sister was expected to be able to memorize her phone number and address, and be pretty and nice. My mother's biggest fear for my sister was that her public behaviour would be ugly and nobody would want to be around her or us as a family. As a result, my sister had impeccable table manners. (I on the other hand was constantly falling short of expectations and was once banned from the dinner table for burping "Please pass the salt, daddy.")
My mother's expectations for my sister drastically changed the day she found out about a man named Leslie Lemke. Leslie Lemke had autism and CP, was blind and brain damaged, but was discovered one night by his adoptive mother playing Tchaikovsky's Concerto no. 1 on the piano after having heard it on TV earlier that day. Turns out the kid was a savant and had been harboring secret talents all those years. He had perfect pitch and could play any song after hearing it once. Cloris Leachman played his mom in the movie of the week.

Secretly my mother started to look for signs of the savant in my sister. She never said a word about it to anyone else. She told me years later that at the time she would have these vivid dreams in which my sister would talk to her in full sentences and they would have long beautiful conversations. She dreamed my sister could read music, play the guitar and sing. In each of these dreams my mother was able to pull some magic trigger or lift a curtain to reveal these hidden talents and release my sister to the world. She could never remember when she woke up what it was that she had done to free my sister.

These dreams must have been very frustrating for my mom. She was fiercely proud of my sister and would not allow other people to feel sorry for her or help her with tasks in which she appeared to be struggling like zipping up her jacket or tying her shoes. "Don't help her, she's knows how to do this", she would say. We would stand and wait as long as it took for my sister to accomplish these things on her own. She didn't want the help anyway, she'd say "I not a baby. I do it."

One summer evening my family was all together on our back patio while my dad was grilling dinner. My mom and my sister were sitting together on one of those cheap fold-up chaise lounges. Mom was laying down and my sister was leaning against her with her head resting on mom's chest. I was about 13 and my sister was about 10. Mom and I were talking, I don't remember what about when my sister piped in (I think she was feeling left out) and said, clear as a bell;

"Mommy I think in my head."

My dad turned around from his grilling and we all stared at her.

My mom took a long time to answer and finally said, "Well, what do you think about my love?"

Regardless of expectations I think we had all at some point wondered what she thought about and I for one, could hardly wait for the answer.

To my delight and my mothers disappointment she matter of factly said;

At the time I thought this was a fantastic answer but had no idea that my mother seriously believed this was the moment when my sister's genius was sure to reveal itself. In my mind that was genius and it still is. Today my mom sees this incident in a more positive light. At the time she was very upset as she realized that my sister didn't possess any savant-ness.

Now in our family we refer to day dreaming or general mental drifting, affectionately as Monkeys and Birds.

Up top is a picture of my sister and me wearing matching double pony tails and outfits, hand sewn by our mother. We both have crooked bangs. I'm wearing my Clint Eastwood squint as per usual. If I could I would go back in time and explain to this child why she must demand sunglasses and maybe even show her a picture of her 40 year old self getting botox.
Posted by The Lady Who Doesn't Lunch: at 10:51 AM

Wow, you have a lot to be proud of! Your parents were amazingly forward-thinking for the time.

I am sorry that your sister passed away so young. I figure you to be 18 at the time, and it must have been devastating for you all. But she is very clearly still alive in the hearts of her family.

Thank you for sharing this! The picture is adorable.

Thanks Heidi! My parents, as much as I complain about them are remarkable people. And we were all made a little more remarkable because of my baby sis.

What an amazing post. I loved it. Why are you not writing short stories with all of this?

wow great amazing parents for those dayz or any dayz.. kewl pic too.

Churlita - thanks! I only just started writing in May so it's never occured to me to write short stories. I'm having enough fun with my blog right now. But you are giving me a big head and I appreciate that.

Suzie - I don't give them nearly enough credit.

I remember seeing Leslie Lemke on tv. His story along with the story you tell of your sister are both touching. Thank you for sharing.

Who could not read this post and melt? This one such a beautiful, moving memory from you.
I love your writing and I'm so glad I 'found' you in blogland!

Hi Step! - Leslie Lemke is such a great story! But I'm sure mothers of special needs kids all over the country reacted in similar ways to my mom.

Hi Betty! - Wow thank you so much! I'm glad you found me too. I enjoy your blog as well.

I started writing this May and have found it to be a huge release. It makes me feel great to know that people like reading it too.

That blog was beautiful. Just beautiful. You are a wonderful person & I am glad you were blessed with such an amazing little sister. hugs

Thank you Miss Aria - I've been thinking about you and practicing my Bonnie Raitt songs in the car for karaoke.

My parents adopted my sister Jane when I was 4. Like your sister, Jane is severely mentally challenged. Her biological parents were heroin addicts and alcoholics. She was born with fetal alcohol syndrome and neglected for months while she was just an infant. Thank God social services took her away from her parents or else she would have died.

I think I might have written about Jane only once or twice in my life. Not because I don’t love her, it is just that when ever I tell a story about Jane people think I’m making fun of her because she is retarded. And that’s not what I want to do.

Seriously, that was an awesome story. Thank you for sharing.

del-v - thank you so much! It felt really good for me to write it too.

I totally understand what you mean - I really don't even talk about my sister that much and then people I've known for awhile get upset when they find out, like I was keeping her a secret.

You should write about your sister some time on your blog. I bet you'd surprise yourself with the outcome.

I had tears in my eyes reading about your mom's dreams. And I agree with you. Your sister's answer to the thought question WAS genius in its own way. Your parents sound terrific, btw.

My Mom's younger brother had Down's Syndrome. He was born in the 50's and my grandparents kept him at home which, as you know was not the norm. He did pass away when he was thirty-nine. I was in my 20's and he was without a doubt one of the greatest gifts of my life.

You are a wonderful storyteller and a great advocate. It's obvious how much you loved your sister and how her life touched you, made you who you are. Thanks for sharing this.

What an awesome story. Ok, I'm almost done trolling for the day...