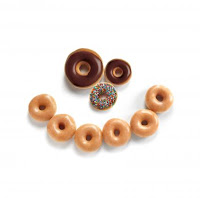 One of the department managers brought in doughnuts this morning - something about helping to cheer on a certain West Michigan college sports club. Apparently a local team of a sport I'm totally frickin' sick of (and have complained about enough lately), has done quite well for themselves in their milieu.

I don't really give 2 shits. I heard doughnuts. I showed up.

Typically doughnuts are not my thing. Not that I don't like them. They are delightful, but I'm more of a salty snack kind of gal, give me some olives or cheese crackers, that's more to my taste. Besides people bring doughnuts in the morning after I've usually already eaten breakfast and combined with the fact that my sweet tooth is not that interested I just don't bother. Bagels are another matter, you'd best get out of my way when I hear there are bagels.

But today - a doughnut sounded fine. In fact it, I perked right up in my chair when I heard there were doughnuts in the break room. A doughnut sounded more than fine. I was experiencing a full fledged craving.

I was busy at the moment so I had to finish my work before I could run down there. Meanwhile I fantasized about where the doughnuts were from, Dunkin' Donuts or some nice bakery. What kind would I like? Maybe there would be those glazed sour cream cake-y kind or maybe if I was able to get down there soon enough there would still be some cream filled eclairs left. I hurried up, finished my work and hied my ass to the break room at an electrifying pace.

The first thing I noticed was a big bundle of green and white balloons and then the Krispy Kreme boxes. I overheard someone say they're all glazed. OK. No big deal, my decision has been made for me, that's all. Glazed it is.

Now imagine my shock and disappointment when what was actually served was a tiny little 2 bite mini-doughnut, which is not a doughnut at all. It's many things, including adorable and cute as a god damn button, but it is not a doughnut. It is a sample, a taste, a tease, but not a doughnut.

I had to hide my disappointment as it is pretty rude to act like a big douchebag and complain when someone has gone out of their way to give us treats. Instead I was gracious and took one. I even went so far as to nod in agreement when some of the other folks expressed a positive attitude toward the tiny treats, saying things like "oh, now I don't have to feel so guilty" and the far fetched "you know a normal sized doughnut is too filling anyway". Whatever people.

Thanks for listening to me bitch about getting free food.

Update 9:18pm - To any of you who happened to catch it - I am deeply sorry for the mortifying grammatical error that was in the title of this post. In my defense - I had a tuna noodle casserole in the oven and perhaps hit the publish button a bit too hastily.

I would also like to take this opportunity to thank you for continuing to come here and read my stupid blog and somehow hold back from making fun of me despite my hillbilly writing style and other mortifying spelling and grammatical errors that have slipped my notice. You are too kind.

My boss will break the mini donut in half and leave the other half for someone else to eat. Really? Who the hell wants to eat a donut that someone else touched and put back in the box. Jerk.

Phew, thanks. I feel better now.

I am right there with you on those bagels Lady, we could form a tag team and go on the pro circuit!

How dare you go on like this when there's a recession out there. People are losing their jobs and homes, and what, you can do nothing but complain about the size of your doughnuts? Have you no shame, maam? What? You have none? Good, neither do I. Those assholes with the mini-donuts should be shot.

1. hillbilly writing is what makes the world go 'round. love you!

2. i would have been pissed too, and found a way to have MORE small donuts than would equal one large one. also, whoever said that a regular donut is too filling better have gotten their stomach stapled yesterday, or else that's just a well veiled insult.

if it weren't for hillbilly writing, I wouldn't write at all...I suppose that would make most people very happy. It's a good thing I don't like most people then.

When I worked at the print shop, one of the sales reps (the Tuesday guy, I think) would sweep in, try to sell his brand of paper to the bosses, and leave a box of doughnuts in the break room. Yay for doughnuts! Yay, I say.

But, if you've ever been in a print shop, you've likely noticed that they're kind of dusty places. That's because the presses puff out a tiny bit of powder on every sheet of paper that comes out. It keeps the fresh ink from sticking to the back of the next sheet of paper. Anyway, the point is, that there's often a haze of white dust floating in the air, slowly settling on everything in sight -- including the doughnuts, the precious doughnuts (some of which were the size of a Volkswagon).

So, unless you happened to actually be standing IN the breakroom when the doughnut guy stopped in and were lucky enough to be the first one to open the box, you were relegated to a dusty doughnut.

To this day I still expect doughnuts to taste a bit like chalk dust. In fact, I'm a little disappointed if they don't...

It's been way too long since our office has had donuts. Nobody is sick enough to bring in the mini ones, though, that's not good for company morale. ;)

I say two or three mini donuts make a regular sized donut. That's my logic for those mini candybars.

While we're on this topic, anyone ever wonder why they call those mind candy bars "fun size"? I've wondered that for years. I even thought it was stupid when I was a little kid. "What's fun about this? It's only one bite!" I would tell everyone.

Uh, that would be "mini" candy bars. "Mind" candy bars sounds like a hallucinogenic. Brain candy. Ha ha. Did I spell that right?

I agree with you...hate mini anything! If I'm going to eat what is considered "bad" for me...give me the whole thing!

" tiny little 2 bite mini-doughnut, which is not a doughnut at all"

Don't they have a name for that...