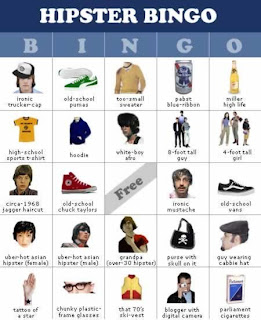 Last Thursday night MDH and I left the cave for a couple of hours to attend a very special and NPR-nerdy event. This American Life did a live show which they simulcast to movie theaters around the country. The particular cineplex we went to in Grand Rapids sold out two huge theaters for the show and let me tell you ladies and germs it amounted to one very large group of nerdy hipster types assembled together all at once.

The nerd factor was so high that before the show started the woman sitting next to me whiled away the time by knitting and a young man sitting behind us, wearing a newsboy cap, knit scarf tied French style around his neck and Che Guevara t-shirt, was engaged in deep discussion with his female companion about game theory. Also observed: Every other car in the parking lot was either a hybrid or a VW of one model or another.

Now having made these observations I have to say that I totally qualify. Guilty as charged. VW? Check. Plastic tortoise-shell framed square-ish glasses? Check. Olive green cotton military style jacket? Check. Simple bob haircut with layering for modern flair? Check. Paperback of Eudora Welty short stories in my purse/backpack? Check. (Note: I don't know if Eurora Welty officially qualifies me as nerdy, but it sure feels that way.) Hemp sneakers? Check.

Have I become a cliche? I had no idea. I don't have many opportunities to compare myself to other people in public as I'm usually very busy with indoor activities that involve being pale and friendless, playing video games and listening to NPR.

I draw the line at knitting in public I guess. 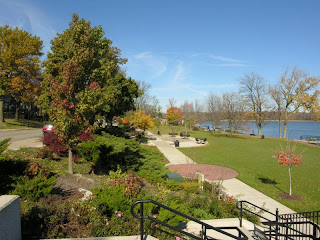 MDH and I left the cave yet again on Friday night and walked to the beautiful park near our house where we seemed to be in the minority as we had or were none of the following:


Hugely pregnant - our neighbors have been busy this winter apparently. (Parent? Get it?) 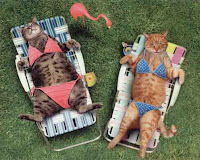 Dog owners - You know, I would take our cat Turtle out on a harness or something if I thought it was at all possible. I once tried leash training my old cat Olly, but it was like I had hooked a Marlin.


Small children - There was an endless steam of only vaguely attended tots wandering alone past us to play dangerously close to the water.


Sandwiches - It was like the whole town simultaneously decided to dig out and dust off that picnic basket thing we all registered for when we got married and finally put the thing to good use. I don't know where ours is actually, but it would have been a perfect. 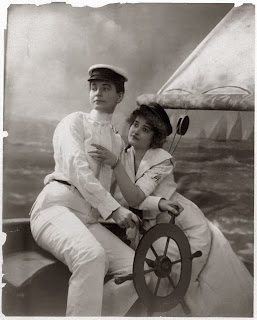 Small Water Craft - The park is connected to a small "Yacht Club", which sounds all hoity-toity, but most of the boats I see there are pontoons and little two person sail boats. MDH and I like to sit next to the boat launch and watch and make quiet commentary to each other about the various boats and boaters.

Friday night I watched two very attractive young men in straw pork-pie hats and cut off madras pants launch a sailboat so small that they had it hitched to a convertible Karmen Ghia.

They looked like an ad for Mentos and I began to fantasize about learning to sail.

It looked so fun and carefree and that tiny sailboat - so cute! Then about 15 minutes after they set sail they capsized out in the middle of the lake and the whole park gasped. It was extremely windy and they didn't seem to be able to control the boat at all. And that water was freakin' cold. It took them about 20 minutes to get the boat back upright. My fantasy was smashed. Capsizing is not cute and sailing is at it's most attractive when you know what the fuck you are doing.
Posted by The Lady Who Doesn't Lunch: at 1:40 PM

Labels: labels are for schnooks

I saw no evidence whatsoever of a big stick up your ass in this post. I saw a preview for the This American Life movie when we took the kids to see "Monsters vs. Aliens". I could actually feel my husband's eyes rolling.

CDP - Hey there! I have no idea how that label got in there. The stick is alwasy up my ass, but you're right - it's not really in this post.

I love TAL, but it's such a private thing I guess maybe because it's radio. I had no idea that there was an MO for a TAL fan and that I seemd to fit it so well. It was weird.

I just wanted to point out that you left out the story of the nerdy hooker, that is all!

Skydad - So sorry to disappoint ;)

My tags/labels, whatever you want to call them are out of control it seems.

Well, if you're going to be a cliche, being an NPR nerd is a good choice.

dont be sad about your VW. its a good thing!

There is a dude lives across the street from us who always walks his cat. Every day. In a little harness thing. And it wanders happily around by his side, sniffing things like a little dog. Which made me wonder if my computer glasses were acting up and maybe it was a dog. But no. It's a cat FOR CERTAIN. And part of me thinks it's 100 kinds of cute, that a grown man is taking his kitty for a walk so it gets some air and doesn't have to stay in a stuffy apartment all day, and the other part of me, which is an asshole thinks, "HAHAHA DUDE, YOU'RE WALKING A PUSSY, YOU DOUCHE!"

Mostly, I think it's cute though and if I had a cat I'd get a harness and leash too...

Nothing like showing up to an event and finding that you are surrounded by nerds. Then realizing YOU are a nerd. Been there.

I bought a little harness/leash thing for my little feline buddy Fruitloop years ago before we discovered his latent agoraphobia. I'd put the harness on him, a joyless affair involving teeth and claws and a lot of snarling... We'd get him outside, and he'd be fine on his little leash until we tried to get him to leave the yard.

Your line about hooking a marlin rings true.

The poor little fella's eyes would get real big, his tail would floof out... The farther we got from the house, the higher on my body he climbed until he'd literally be sitting on the top of my head, staring forlornly at our house... Once he couldn't see the house any more, the yowling would start. Twenty seconds after the yowling came the flailing.

We don't take the cat for walks much.

LOL...the fantasy isn't the same when you land in the freezing water! Fun while it lasted.

I...er... was planning to see the encore next week of This American Life.

So wanting to know about people is nerdy? And, uh... having glasses and living in Portland and being a liberal and an NPR junkie and running a semi-political blog and...

I'll just give up now.

I was going to tell you that I loved reading this and had a few chuckles and I am going to pinch it off you, ok!?!

Sparsely - go right ahead Honey - just give me a shout out.
Thanks!