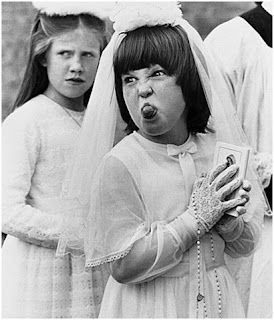 Yesterday after my cheap shoe and personal care item shopping spree I finally had a chance to catch up with my best friend Amy - it was heaven. What with her busy schedule wrestling 2nd graders to the ground and my back pain and job related depression we haven't had much of a chance or been in much of a mood for our weekly standard (and trust me - necessary) 2 hour long, cackling sea hag phone conversations. In fact it had been weeks.

We had a lot of catching up to do - mainly her to me, because most of my activity lately involves being horizontal and moaning and not in a good way. Amy had not only been on spring break with her entire family, including her evil mother, at their family beach house in Charleston last week, but also had ended her trip early because her daughter Lil' Baby Lion (LBL) had to be back in town in time to officially become a Catholic.

Yes. Amy's ex-husband Assface had decided several months ago, from out of seemingly nowhere, that suddenly it was extremely important to him that LBL become Catholic and start going to church with him at the ripe old age of 13. Amy was surprised by this revelation, as during her entire 15 year relationship with Assface he had never once been to church or shown any interest in it. She consented however after discussing it with LBL who said she didn't give a crap one way or the other as long it would get her crazy-ass father off of her back about it. Lovely. I'm sure that's just how Jesus would want it.

Anyhoo... last weekend LBL was baptised, confirmed, and took her first communion, or as MDH put it, dunked, fed and slapped.

That's all well and good, but the real dirt was that LBL had begged poor Amy to please not leave her alone with Assface's entire family, who had come all the way from Vermont to witness the occasion.

So at the request of her daughter Amy went.

Amy took great pains to make sure that she looked like a million bucks. Blown out hair, impeccable makeup, fantastic ass-hugging outfit, high heels. The works. (You should know that normally Amy, although she is very cute, dresses like she just got out of bed; too big jeans, t-shirts that she caught from out of a cannon at a sporting event, sneakers, etc.) She said that nobody in Assface's entire family would even look at her, let alone talk to her, but it was fine because it gave her the opportunity to get her eyes full and report back to me about how crazy and horribly behaved they all are.

Best of all (to me) was that one of my more serious ex-boyfriends was there with his ugly ass wife so I got to hear all about how ugly she is and how fat and disgusting my ex-boyfriend has gotten. Just knowing that this ex-boyfriend is a good friend of Assface should tell you that he is an economy sized douche bag who was particularly cruel to me. 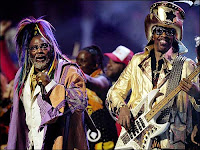 My favorite highlight of the event, as reported by Amy was a conversation that she had with the priest, Father Funk (no joke). At the end of the evening as she was saying her farewells (to those that would speak to her) she asked Father Funk if he was going back to Assfaces's place for a small gathering to which everyone but she had been invited.

His answer was surreal, as though he was some foppish-femme character in a movie from 1937, "No. I'm just going to go home and have a nice hot toddy", he pipped. To which Amy used every ounce of strength left in her body not to reply "Oh, you've got a boyfriend?"
Posted by The Lady Who Doesn't Lunch: at 12:05 PM

When I was really sick last month, my British friend told me I should mix a hot toddy. It was possibly the most vile thing I'd ever ingested.

Good on Amy for the obnoxious ex reconnaissance, though. Sounds like it was a fun conversation :)

Man, I love these stories. Always entertaining. Amy is a delight and I heart her, too.

I agree with Gwen these are wonderful stories and they deserve some sort of book deal!

Thanks for keeping us entertained.

Note to self: never marry a guy named Assface. It's a bad sign.

I'm still laughing at your post title. That's one of my favorite Kids in the Hall sketches.

i think you need a drink after this post LOL ... so many hated people HAHA [and that's why i read this blog]

Good for Amy...not sure if I could have held that last comment in! Exactly what I was thinking.

Poor LBL! She must be very easy-going to agree to all that at her age! As a "kind of" Catholic, I can attest to the fact that a lot of it is just for show. I admire Amy a lot for her patience and willingness to hang out with Assface and his family...hope she looked hot and happy!

Hilarious. My ex does that too. he keeps finding and then losing and then finding religion again. I suppose whatever works for him at the time.

Hilarious! I can picture it all. I'm just wondering if I know the ex-boyfriend (did he have a dog named Smoky?).

I think "assface"'s agenda for the rest of his life is to make Amy's miserable. He's such a mother f*%#ker. We were all right about him long ago.

Giz- I have no idea what a hot toddy is, but it sounds very comforting and not just a little bit homo-erotic. As for Ames - she is the apple of my eye, the light of my life and so goddamn funny.

Gwennie - we have much in common, but she is also in many ways, all the things that I am not - it works well for us.

Skydad - glad you like them - it makes me feel so good to write them - but with Amy it's mostly just a matter or reporting the already hilarious facts.

WendyB - It's amazing isn't it? All the flaws that some women are willing to overlook.

Dale - My husband has a way with words.

BeckEye - Ding, ding, ding! If I had a prize you would win it! Zactly!
His WIFE did it.

Player - My phone conversations with Amy take the place of a cocktail. We laugh till we get headaches and turn all of our grievances into funny comedy jokes. Otherwise I think she and I would have chosen to suck a tail pipe long ago.

Renwoman - I'm sure Father Funk was too pickled to get offended anyway.

Michelle - you hit the nail right on the stigmata - poor kid is going to have to learn how to say no to her dad.

Churlita - they went round and round about it when LBL was a baby - she kept telling him to go to church to prove it meant that much to him - otherwise Amy, as a confirmed Athiest, felt like getting her baptised was blaspheming and just plain stupid.

Frenchie - hey girl! Did you get your Mozilla fixed? You never met the boyfiend I mentioned in the post - he was before your time. We lived together for a little while, during which time I didn't really ever see or hang out with my friends - so I'm not sure that anyone besides Amy met him. He's a toxic, lying douchebag. I'm a bit embarassed that I stayed with him so long, but he was ultimately one of the reasons I decided to get my shit together.

My wife used to fix me hot toddies every now and then, until she realized I was putting up with the taste just to get some rum in my tum.