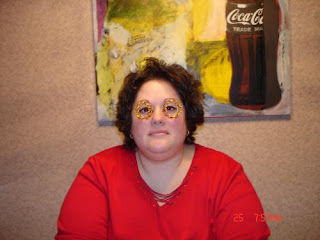 So I talked to my friend Steph tonight who gave me permission to post this lovely photo of her sporting my napkin rings as eye glasses from Thanksgiving 2004.

Since we moved up here I'm usually a dork all by myself, so it was nice to have someone to back me up in my dorkness. I need that support sometimes.

I say this after having spent part of my evening acting out some of the musical numbers from Fame and Oklahoma in my living room while wearing florescent green pajama pants and a mixing bowl as a hat. What can I say? MDH is having dinner out with his boss and there is just simply nothing on TV tonight. The show must go on.

It's such a relief that the neighbors behind us have moved out. I could have performed my musical numbers in the nude and no one would have been any the wiser. I love not having neighbors!

The other night we noticed that the lights were on in the empty house and a realtor appeared to be showing some people around which caused MDH to immediately strip down to his underpants and stand with his backside to the picture window in our dining room. We hope they saw him and were frightened enough to back out on any offer they may have already made to buy the house.

He and I agreed to try to appear as unsavory as possible from here on out, starting with the empy kitty litter container that we have filled with water, that has since frozen, and put on top of the hot tub to keep the high winds we have been experiencing this week from blowing the cover all over the back yard. The concrete bird bath (that MDH refers to as the Malaria Factory) blew over and we haven't bothered to pick that up either. Take that.

Good strategy. I always prefer to chase people away than have them move in nearby.

There is nothing wrong with playing out your dorkness. We all do!!

If you could make friends with a police officer and have them park their patrol car in your driveway during another open house, that would be great. ;)

As soon as it's warm enough you two should stand out in the yard and fight, loudly and violently.

Or talk really loud about your rat infestation.

I say start a never-ending tire fire in the backyard.

Sadly, the fist week in our new condo, my drunk husband and his drunk friends actually did stand out in the yard and fight, loudly and violently..I should have calle dthe cops on them but I was way to embarrassed..men are stupid

I hate it when people mis-spell "too"..and what's with the "calle d" crap?? sheesh..just put me out of my misery already.