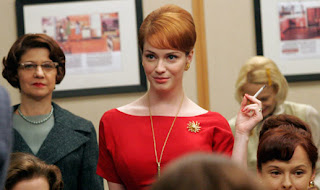 If you haven't seen Madmen - you should get on that right away. Especially if you love retro 60's decor, fashions, lifestyle and attitude. It's so spot on accurate and also unbelievably good. It's unlike any other period show I've seen. The characters are real and say real things. They are sexist, racist, anti-Semitic and smoke like fish. The woman are actually round and robust and are dressed like the women in our old family photos. They could be your grandma, your father or your aunt - they say and do awful, ignorant things, but you love them and root for them anyway.

The show revolves around characters who work for a huge advertising agency called Sterling-Cooper in Manhattan in 1960.

I recorded the first episode on our DVR and begged MDH to watch it with me. He's not a big fan of serial dramas, but came around when I told him that it is created, produced and written by Matthew Weiner who also produced and wrote The Sopranos. We were both instantly hooked. The details drew us in and the story line seems to be keeping us there.