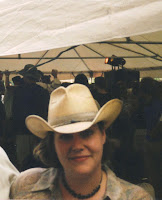 One of the perks of having no children is that we can just pick up and go and do stuff whenever we feel like it.

Last summer I didn't have a job so we didn't do jack shit or go anywhere (except Comfest, of course). But this summer I am sort of gainfully employed so we can afford a few adventures here and there, and for some reason we seem to have squeezed a great many of them into the next three weeks.

Tomorrow MDH and I are taking off for a long weekend in Philadelphia with my best friend Amy and her husband Ted. I've always wanted to do this kind of thing, you know, the grown up couples holiday, but it has never worked out for me and Ames. I was single for a long time and then she was married to Assface and he never wanted to go on any trips except to visit his family. When I finally hooked up with MDH, he and Amy didn't get along very well (they do now), so it just never seemed to be in the cards.

I'm beside myself with glee. Plus Amy and Ted have totally laid back and allowed MDH and I to plan pretty much everything, which is what we like to do.

The weekend after next MDH and I are packing the car for Columbus because it's Comfest weekend and we never miss that. Well, since we've moved away to the Tundra I pretty much drop MDH off at the entrance to the park on Friday morning and never see him again until Sunday night.

If you don't feel like clicking on the link above, Comfest is a community festival in our old neighborhood in Columbus that has been going on since the early 70's. It's totally free and there are no corporate sponsors allowed - the whole thing is funded by beer sales and volunteers. Basically it's 3 days (from 11am to 11pm) with 5 stages of bands all day long. At any given time there is a band playing on every stage. It can cause some serious conundrums for my poor darling when two or three great bands are playing at the same time on different stages. What is a man who has been drunk on draft beer for 2 days straight to do?

Comfest is special to us for a lot of reasons. For me it's a tradition, but a freakin' kick ass tradition. For MDH it's the entire reason that he decided that Columbus didn't totally blow when he moved there from Boston and ended up staying long enough to meet me. He stumbled upon Comfest quite by accident one afternoon while going for a stroll through the neighborhood and fell instantly in love with my city.

Frankly, I liked Comfest a lot better when we lived down the street from it and I could come and go as I pleased. These days it's a bit of a cluster-fuck and I get a little claustrophobic in a crowd. (I also think I have mentioned before that I'm not a huge fan of the port-a-john.) I pretty much go and hang out for an hour or two and see one or two bands that are old friends of mine and then take off for the suburbs to hang with my peeps like Dan, Steph, Amy, Frenchie and Nature Boy.

It is understood among our friends that if you want to spend any time with MDH during the last weekend of June - go to Comfest and you're likely to run into him. I suggest going very early as his state of intoxication intensifies later in the afternoon and early evening and he is highly likely to already be reduced to a wet, incoherent mess, rolling around on a picnic blanket with the remnants of a broccoli burger all over the front of his shirt.

I'll be at Amy's. Or at our hotel. Where there is running water and air conditioning.

I recently discovered that my company will be closed for Friday July 4th and also the following Monday. God I love that place! So fuck yeah - a four day holiday weekend and what better place to celebrate our country's independence from England than Canada? Yes. We are spending July 4th in Toronto. MDH has a big boner because I finally agreed to take the train into the city.

My baby loves the choo-choos.

I, of course have big issues with the train toilets, but I've got to throw him a bone sometimes. Besides gas prices are outrageous and it's easier to enjoy all the city has to offer without being encumbered with a car.

Anyhoo... What I'm trying to say here is that I won't be blogging for awhile. Not to worry, I'm sure wherever I am, I am having a marvelous time and I hope that you are too!

Meanwhile I will leave you with some random photos of summer travels passed.
My first (and last) Red Sox game in 2004 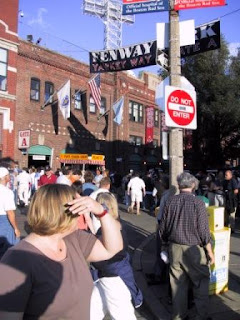 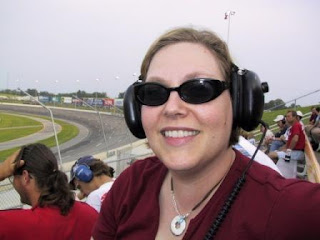 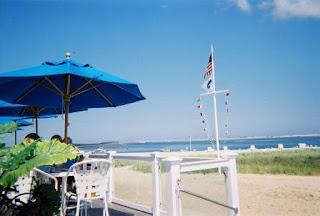 Waiting in line at the beer tent at Comfest 2005 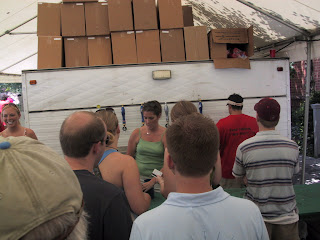 The Main stage at Comfest 2006 - like I said - clusterfuck 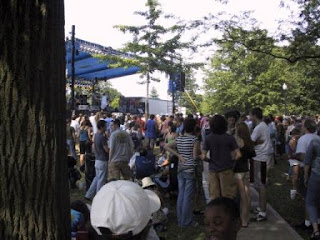 By the way the photo at the top is of me at Comfest in 1999 - my first Comfest with MDH. Ahhh. He asked me to crop him out of the picture - party pooper.
Posted by The Lady Who Doesn't Lunch: at 9:28 PM

Good for you girl! Three weeks worth of adventures and something to be excited about. Taking the train to Canada sounds fun and can't wait when you are back to blogging so I can hear all about the adventures.

Have several drinks for me! And have a great time. You will be missed.

I see a few bands on the schedule I recognize...no New Bomb Turks though.

I have heard of the event itself and actually had plans to go down there but never made it. One of these years perhaps.

RenWoman - MDH is so excited about riding the train - I make fun of him, but I love it too.

Evil - you never know - all the members of New Bomb Turks could be playing under a different band name or popping up separately with different bands. You should pack up Renee and get down there. It's free man. This year MDH is especially jacked up about Michelle Shocked. He actually emailed her with tips and pointers on how best to enjoy Comfest and she sent him her cell phone number. Nifty, eh?

I'm sad you won't be around but ecstatic that you're going on adventures! Have a great time, be safe, and come back. Smooches!

Holy crap. I just saw that YDH has Michele Shocked's phone number. Very cool! I like to sing God Is A Real Estate Developer really loud.

Sounds awesome, all of it. I'll be in Phila this weekend too, a full weekend full of family stuff.

Aside to Gwen--I haven't thought of Michelle Shocked in years, but I saw her live in Philadelphia in 1988 or 1989, and it was the BEST show. Now I'm going to be singing "Anchorage" all day.

I'm all for the train travel. I was conceived on a train or so my mother said. Always loved train travel. It's probably pretty civilized in Canada. We seem intent on destroying train travel here, since that would compete with big auto and bit oil.

Love the photos. have a blast.

Have fun! We will miss you while you are having a good time... sniff... without us...

Hehe, and just think...I just moved from the Philly area!

Have a great time at all your various adventures. Never even heard of Comfest so looks like I'll be googling it.

Listen, while you're in PA please stop by and visit my mom. She's been bugging me to come up and visit. I'll just tell her you're coming instead. Really - it's fine. She'll even drive you and MDH to the movies :)

Have a great time and don't forget to buy us all t-shirts!

I have thought about that idea as well. Renee is not traveling well right now...she just got diagnosed with severe TMJ and has not started treatment yet. Fierce headaches and dizzy spells have made Renee a bit unpredictable as far as doing stuff right now.

I did think of looking around on line to see if any New Bombs sightings have occurred.

Good for you guys. Have a great three weeks.

It sounds like you've got some fun stuff to do on your vacation! Have a blast and leave the blogging world behind. Just don't forget us. ;)

Go. Drink. Pee in the bushes. Enjoy. And if you ever find yourself in THE ATL I'll take you to a place far from the NASCAR A-holes.. maybe even to a place that serves you beer in a bed. uh-huh, thas right.

oh..I remember when traveling with "That Dude I Married" was fun..now all we do is give each other the evil eye and see how fast one of us can drive off before the other one notices..isn't love grand?

I cannot believe you are in Toronto and I'm not here...I will be away that week. What a total bummer. I hope you enjoy the city for all it's worth. It is a great place to spend a few days :)

rolling on the picnic blanket... i love you LOL

coming to canada and not even gonna visit me in ottawa? for shame!

Have a great vacation - everywhere you go!

"she was married to Assface"

Ugh. Imagine having to wake up and kiss that in the morning.

I'd make fun of Columbus, but like the women I pick up, it's just too easy.

Cute cowboy hat. I never can really pull that look off. Do you have to wear one to get in the door to Cornfest?

you are wicked cute. man, i have been gone a while