So in a couple of weeks my crazy aunt Liz, my sister* and my niece** are all coming to visit us at our new Texas digs. I'm excited and nervous at the same time. They have never come to visit us. Ever.

I think the whole thing started when I told my sister about my surgery, after my recovery was nearly complete mind you. I think that she and Liz thought that they were going to come here and somehow take care of me. Well thank god I foiled that plan by waiting until after I was better before I told anybody about it. Now when they come we can just have fun. Although I can't help but wonder how they thought I'd still need taking care of when they didn't book their flights until 6 weeks after I was officially recovered. Nice try. Let's just party.

I got in big trouble, by the way, for not telling anyone in my family (besides my parents) about my being sick and having surgery until after the fact. I didn't want to make a million phone calls telling the world about my rather personal, crotch related ordeal, so when I was ready for people to know there was only one phone call necessary. My sister***. I knew once she knew then everyone in my family, whether they were interested or not, would know.

And damned if the fucking phone didn't start ringing less then 30 minutes after my initial call with her ended. This is exactly what I had tried to avoid - talking about my uterus and having multiple conversations involving the words "cervix" and "ovaries" to a million different people who, although technically family, are not necessarily the people I'd like to discuss this shit with.

Thankfully, I was mostly healed and recovered and better able to handle such discussions than I was prior to the surgery when I was quite irritable (to put it mildly) and ill. 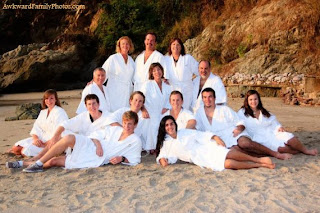 Crazy aunt Liz is my dad's sister and the one that came down to the hotel restaurant for breakfast in her housecoat and slippers at the last family reunion MDH and I attended. She didn't have her teeth in either. Other members of my family also came down to breakfast in the hotel restaurant unwashed and uncombed wearing sweats, pajama pants and t-shirts and flip-flops. Somehow though that doesn't seem quite as shocking as a housecoat and slippers because you often (sadly) see people**** in public wearing sweats and pajama pants with t-shirts and flip-flops. A housecoat and slippers seems a bit intimate of attire for public airings.


Anyhoo... my family all think I'm a huge prig because I give a shit about such things as whether or not I shower and appear fully dressed in public and that's totally OK with me.

I know that many people in my family also think that I'm a prig because I read a lot, I sometimes use big fancy words and make an effort to use correct grammar when I speak (or write***** (I fail sometimes, but they probably wouldn't know that)). I don't watch Dog the Bounty Hunter, follow NASCAR, go to church or listen to country music. I know they all love me, as I love them, but I'm not one of them.

As a result of this most of my adult life, with a few exceptions here and there, I have chosen to keep my family at arms length, so it'll be weird to have so many of them here all at once.

*She's actually my cousin, but when we were children I lived with her family for about a year or so, until my dad could get his shit together after my mom left us. Even after I went to live with my dad again I continued to spend a great deal of time at her family's house throughout my life. I went on family vacations with them and spent several weekend with them throughout the year. and we have always felt like sisters. We made a pact when we were teenagers and decided that because we were really sisters in our hearts we would always refer to each other thusly. At this stage in our lives it's weird to keep doing it, but we continue to do it because we have always done it. It's awkward however when I talk about her to other people who don't know her and I have recently taken to referring to her as my cousin rather than feeling like a liar and having to explain about how she's my sister, but not really my sister. I assume she's doing the same, but it has never come up.

**Her kids have always called me "Aunt Lady".

***Fifteen years ago she would have been one of the first to know, before the fact even, but we aren't as close as we once. I really don't like her husband very much and the feeling is mutual I think. I used to hang around and do stuff with them anyway and just put up with his bullshit, but as the kids got older and busier and I got older and busier I had less time and patience. Also, it was always a one way street in that I always had to go to their house (about an hour away) and they rarely seemed able to make the effort to come to me, and that shit gets old after awhile, especially if her husband was going to act like a total asshat the whole time I was there. I wish I liked him. I've tried to like him. But there it is.

*****It's all I can do not to have an embolism when I read some of my family members posts on Facebook.
Posted by The Lady Who Doesn't Lunch: at 7:31 PM