So far so good.  My brother in law Miami arrived Friday afternoon with very little drama or fanfare.  He has a designated smoking spot on the covered and smaller of our two balconies and an entire guest suite to himself and he seems to be pretty content.  Ten days has been announced as the length of the visit, after which time I'm not sure what is happening.  He will either move on to stay with MDH's other brother Las Vegas or visit his son Phoenix, currently doing time in Arizona.

Over the years I've never really spent more than a few hours with Miami and I talk to him on the phone occasionally, so I honestly don't know the man.  Here is what I am learning: 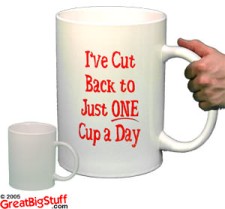 Miami is very self contained.  He brought his own ashtray, an enormous coffee mug that he fills up with slightly more than half of the 12 cup pots of coffee I have been brewing, and a 32" flat screen HD TV, which he wasted no time in hooking up to the cable outlet in our guest room.  All of this is fine with me, much to my surprise.  It's MDH that is running around apoplectic and constantly apologizing to me for what he perceives to be Miami behaving inappropriately.  Yes, that's a lot of coffee, but we can make more.  It's fine.

Yes, the covered balcony and parts nearby, are currently reeking powerfully of cigarette smoke and ashtray.  Also, the guest room has a strong essence of old-man-who-smokes-a-lot emanating from Miami's clothes, luggage and assorted belongings.  It totally stinks, but the smell will dissipate eventually and all of the linens will be washed.  In bleach.  That's how I roll anyway.  Not a biggie.

Yes, Miami has a propensity for walking around shirtless while wearing tiny shorts and rinsing off paper plates and putting them in the dish drainer, which is weird right?  I probably should have separated that last sentence into two sentences, but I didn't so I'll just clarify that his wearing tiny shorts is unrelated to the washing paper plates thing.  I mean, he doesn't specifically strip down to tiny shorts in order to perform the washing of paper plates.   Anyhoo... we all have strange habits and quirks.  He apparently thinks it's weird that I use paper plates.*

Miami often talks like a character from a 1950's gangster film, which I find quite charming.  He said that Phoenix "wood-na got picked up if some stoolie had-na dropped a dime on 'im".  He called me "dollface" the other day and I nearly swooned.

So it's day three and I'm here to report that there is nothing to report.

*The paper plates are a new thing.  The kitchen in this apartment is so tiny that I only unpacked the bare minimum of dinnerware when we moved in, so we only have 4 place settings.  It's weird to me too, but I sure as hell am not going to wash and reuse paper plates.  Miami washes them and sticks them in the drainer and as soon as he walks away I put them into the recycle bin.**

**OK.  That's a lie.  I put them in the trash.  We don't have recycling here and I haven't figured out yet where to take the recycling.  Or for that matter where the fuck to put it while it's accumulating.  This place is tiny and I barely have enough room for the things I want to keep, let alone the shit I want to throw away.  Sue me.***

***I have become an environmental terrorist and feel really weird and guilty about not recycling.  I used to love recycling in the Tundra.  It made me feel good, but the Tundra made it easy to recycle as it was just part of the city trash collection.  Also we had lots of space for the recycling bins.  Here they collect the trash twice a week, but no recycling.  I'll figure it out eventually, but until then I have recycling shame.
Posted by The Lady Who Doesn't Lunch: at 6:36 AM

He brings his own regular sized t.v.? The hell?

Rinsing off paper plates is weird, but at least Miami is cleaning up after himself. Is there no Mrs. Miami? Or a string of interchangeable girlfriends he inflicts upon you? I'm already fascinated with him.

Is it wrong that this whole situation sounds like a SITCOM? :) Crazy gangstery relative moves into your guest suite? It could be a sort of "Two and a Half Men" only with Miami. And you know....funny!

Who washes paper plates though? WTF? I guess he's just trying to be a good guest?

Kirbs - Yes. He brought everything he owns. MDH would only let him bring in clothes, his computer and the TV. Everything else he owns is in his car. The man has hit hard times - and that's why he's here - he's looking for work. Times are hard for construction workers in Florida, so he came here and if things don't pan out here he's going to head further west.

About the girlfriends - There is definitely no Mrs. Miami. I should probably write a whole post about it.

Veg - The world that MDH's family lives in is so weird. Everyone in his family, mother and all four brothers make this sound when reacting to almost all new information, ready?... "Bagh!" In my family we say things like, "Oh really?" or "I'll be damned". We tend to react in complete sentences or at least try not to sound like we are choking on phlegm. With MDH's family I try really hard to just observe and report and not to judge (it's difficult).
Miami has turned out to be an excellent guest, although I do wish he'd put on a shirt. But what-evs, I'm glad he's comfortable.