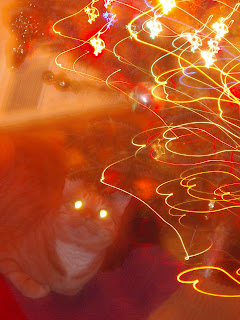 Since winter has creeped in, it seems that MDH and I spend most of our down time lazing around like a couple of exhausted walruses, he watching football and me playing video games, both of us overeating (it's so nice to do things as a couple). OK, it's pretty much like that year round except for him the sports change up seasonally.

But this weekend was different and our house was abuzz with activity like cleaning and stuff.

A few weeks ago I decided that I wanted a Christmas tree this year which involves some amount of movement and effort on my part with the preparation, cleaning and tree trimming and whatnot. It also involves movement and effort from MDH because he is the one who insists on a having a real tree so I force him to go with me to get it. Well, it started out against his will several years ago, but now I think he kinda likes it, although he may never fess up to the experience being anything other than a sharp shooting pain in his ass.

I think it's because he grew up with a bummer of a family and a white plastic kind of tree. Their tree was the kind that was a comically exaggerated pointy pine tree shape and permanently decorated with neon colored balls and flashing lights. The kind of tree that doesn't even pretend to be real and with each flash it shrieks, "I'm fake! I'm fake!" His brothers would drag the box down from the attic, pull it out of the box and simply plug it in. Boo-yah! It's Christmas!

I also prefer a real tree. They smell nice and we mostly had fake trees when I was growing up too but my mom bought the kind that attempted to look real. After a couple of years of use, and being repeatedly and hastily jammed back into the box after the holidays, fake trees start to look like they have hat head and no amount of "fluffing" can fix it. Also after awhile a branch or two seemed to have gone missing so you'd have to bunch it all up so that it looked more filled in or just arrange it so that the empty spot was facing the wall.

And by the way where the fuck could that branch possibly have gone? It made no sense. Obviously it didn't go wherever the ornament hooks ran off to because those wicked little things always seemed to turn up eventually although it was usually in the bottom of my bare foot the following July (the joys of 70's shag carpeting). As a grown up woman (with scars all over the bottom of her feet) I made an executive decision to never use ornament hooks and I tie all my ornaments with ribbon. And I always wear shoes in the house just in case.

Do they even sell ornament hooks anymore? Or did people come to their senses and send them to go live with the lawn darts and the electric space heaters in dangerous gadget land?

Anyhoo... MDH dreamed his whole life of a more traditional and rustic Burl Ives kind of Christmas and the cartoony jazz club tree just didn't represent. (You might have expected that I would say Currier & Ives, but in our generation Burl was the snowman narrator guy in that Rudolf Christmas special and you can't get more Christmas-y than that.)

When MDH is passionate about something he never goes halfway. Like I said, he is the one who insists on a real tree and then he insists that if we are going to have a real tree that we should have only the freshest tree possible so that it takes longer to dry out and is less likely to catch our house on fire and kill us all in our sleep. So we drive out to a tree farm and ride a tractor out to the middle of a field and MDH cuts down our tree with his own bare hands and a hacksaw he keeps in the trunk of his car for the off chance that once a year I may or may not decide that it's a Christmas tree year.

At least I hope that's what the hacksaw is for.

Whatevs... it seems to make him feel manly and puffed up to cut down our tree and we found a gorgeous one and it was only $35 so I splurged and got a wreath too and the whole event was so pleasant and easy it made me think of another reason that living here in the fucking tundra may not totally suck and that's kind of a big deal because so far I've only been able to come up with about one reason living here doesn't totally suck per year and we've lived here 6 years.

Drumroll (people dressed like marshmallows in down coats, micro fleece, and cargo pants are cheering, the crowd goes wild) ... The 2009 thing about living in western Michigan that doesn't totally suck is:

This place is lousy with Christmas tree farms so we never have to drive very far like when we lived in a city.

Previous years winners include, in no particular order:


By the way this is only our 2nd tree since we've had our cat Turtle and I forgot how much he loves to lounge around under there and drink the water from the tree stand. That's him up there with the devil eyes at the top of my post. It's so annoying because he makes this slurpy wet noise, he messes the tree skirt all up and his face and paws get all wet. Little weirdo. I suppose it could be worse as I seem to remember the cat we had when I was a little kid climbed and pissed all over our tree which is why my mom started buying the plastic ones. Christmas is so complicated.

I hope there aren't too many spelling and grammar errors because it's late and I'm justing going to hit publish and get my ass in bed.

We have always liked a real tree, and Kathy always talks me into a bigger tree. I try and save the small, runt looking tree like Charlie Brown.

All it needs is a little love!

We always get a real tree. When the girls were younger, we used to go and cut it down ourselves. Now that they're older and don't care as much, we just buy one from a parking lot and let it shed all over our living room for a couple of weeks. Charming.

I used to like real trees, but then I became the one responsible for the purchasing and cleaning up after them. I immediately marched straight down to Target and bought a fake one, and I've never looked back. Sprinkle a little Pinesol on it and you'd never know. Kidding, just kidding.

When Max was little he would climb up INSIDE the tree. He was very careful and never broke anything; he'd just lounge deep inside and watch us. Skylar, on the other hand, likes to sleep UNDER the skirt. Cats are dumb. And funny.

Fake tree. In fact, I'm trying to find one that folds up like an umbrella so I can leave the crap on it when I jam it into the box every year. My dog used to love to lay under the tree also. He also liked to pee on the real ones when we got them. At least I hope it was him that was peeing on it.

Lady!! First off, thanks for your sweet comment on my last post..now to the Hater part...Real trees make me nose burn and my skin itch..I like the "idea" of them but the "reality" never quite works out. I'm that weirdo that takes pride in how realistic my fake tree looks and I have actually elbowed another human in order to get one at 90% off retail (I'm only slightly ashamed of myself for that one). Congrats on things not sucking that bad. I have to go hang my fake garland on top of the doorway now..hahaha. *sigh*, I'm batshit crazy.

P.S. I also use ornament hooks..I know, I know, laugh at me now.

Skydad - I always buy a fairly small tree because I still don't have a lot of ornaments and I don't live in a house with 12 foot ceilings anymore. I can't so far as to get the runty ones though - but they are cute.

Churlita - I wouldn't mind one from a lot (or a fake one for that matter) but MDH and his hacksaw will not be denied.

Kirbs - My mom always used to complain about the mess of real trees, but I don't think they are all that messy when they are super fresh. We have hardwood floors now too so the sweeping is easy - I don't mind.

Gwennie - my old cat Ollie used to go all Godzilla on the little trainset we used to have running under the tree until he finally broke it - and he batted at all the ornments - so if all Turtle does is mess up the skirt and drink the water that's fine with me.

Suze - yes pissing on the tree would be where I draw the line too - I think our cat pissing on the real tree was the catalyst that got my mom to break down and buy her first fake tree.

Linka - I would want my fake tree to look as real as possible too - not perfect - but real. Not that I want spiders, mildew and needles dropping, but real enough. Not a white and neon flasher - although my friend Steph has a big white tree that spins, plays music AND has fiber optic lights that change colors with the music and for some reason I don't mind it. In fact it's kind of cool.