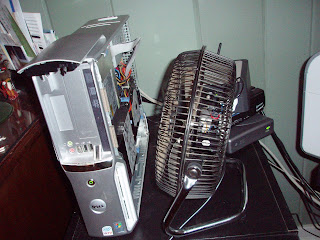 Living without my computer is simply unimaginable, let's face facts. Living with it for 30 minutes at a time at which point it starts to whine, sputter and shut down, is simply undignified so yesterday I broke down and did what I had to do - I called Dell support.

I spoke with Vincent a nice young man in the Philippines, who walked me through a couple of exercises in futility. Things that I had already tried before on my own for free and things that unsurprisingly didn't work when I tried them all over again while on the phone with Vincent as my guide for $49. Remarkably cheaper than I would have guessed, but still.
My conversation with Vincent wasn't a total loss of my $49 because he was able to get me to be a little more brave and dig into the machine a little deeper than I had before on my own. I discovered just how piping hot things were becoming inside my sad old computer and came up with a temporary fix on my own that you see in the photo above, until the new parts arrive.

This handy little arrangement, unbecoming though it may be (my old window fan is dirty), allowed me to leave my computer running all yesterday afternoon and well into the evening hours. I dare the fucking thing to overheat now.

Other goings on this weekend:

I made BBQ pulled pork in the slow cooker, which MDH now refers to as "the all day torture device". He must have asked me 5 thousand times, "is it ready yet?, is it ready yet?"

Not to be left out when there's excitement MDH has been experiencing troubles of his own on his laptop, which when combined with the drama I have been having with our home computer has caused a complete meltdown of all civilized adult behavior in our household. If it weren't for televised sports diverting his attention I'm pretty sure we would have resorted to cave man grunts by noon and flinging poo before dinner. Thank you ESPNHD.

After some Internet research (that I'm able to do now thanks to the new temporary cooling system) I am pretty sure that the user profile on his laptop is corrupt and since his computer is owned by his company, it's really something that he will have to wait til Monday and have his IT department fix.

The man has no respect at all for my IT background especially when I give him answers he doesn't want to hear so he has decided to take matters into his own hands and try to fix it himself. This is the same man that tried to get rid of a virus last year by deleting his Internet viewing history. It would be funny if wasn't sooo not funny.
Posted by The Lady Who Doesn't Lunch: at 2:26 PM

Nice job rigging the alternative cooling device! Do you have a fan in the computer that is bad?

Ha. My pork shoulder has been cooking all day.

I saw an article online about a British medical study of "computer rage". I totally sympathize with the sufferers.

I am totally blanking out the whole rest of your blog because I read "Pulled pork". Oh my gosh, I live for pulled pork...there's a bbq place down the street from me that does it all out on the big black bbq machine thing and it wafts on over to my house...but only in the summer...I miss that.

I'd make a mean comment about Dell's help service-but I will refrain myself. I'm glad that you're experience with them seemed much better than my numerous attempts at dealing with them the short time I had my Dell laptop (just over two years).

I wrote about how badly Dell's customer service sucked on my blog once. Then a bigwig from Dell googled and found my blog and told me if I needed any help he would personally see to it. That was kind of cool, but I'd rather just have decent service from the get go.

Hello, Lady. Your pulled pork made me drool a little and now my keyboard is acting up. Can you come over and fix it?

I have had to call the Dell help desk many, many times!!! Usually a toss up on how helpful it turns out to be. But I am no IT person...good to know I can count on you.

I LOVE PULLED PORK! Sorry hubby thinks the slow cooker is a big tease. I think its the best invention ever!!!!!

"I spoke with Vincent a nice young man in the Philippines..." that line alone had me laughing but I also truly appreciate your fan rigging!

Whatever you do, don't dunk your computer in a bucket of ice water. That only works for cooling down beer.