Brace Yourself - I Hate Birds 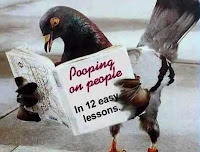 Whatever. It was fine as background noise until they started playing clips of bird songs. The bird guy had a big high hard one for bird songs.

I don't care for birds, or much else having to do with nature, but I was willing to keep it going for awhile longer merely because I was busy and didn't feel like figuring out what the hell else to listen to.

Anyhoo... at one point the radio host introduced the next bird song clip and the crazy bird guy broke in excitedly and began to describe the subtle and brilliant nuances of the upcoming bird song.

The bird guy just knew that this was going to be the best fucking noise that anyone in the entire known universe and possibly even galaxies beyond our own have ever heard - so he prefaced the bird song clip by saying, "Brace yourself".

Yes. He said brace yourself.

And sweet jeezus didn't I prepare to have my mind blown? And wasn't I glad I braced myself for the clip he played - of a fucking Cardinal.

It was a fucking Cardinal. A Northern Cardinal, to be specific. I could scare away about 7 of them this very second if I stepped into my back yard. In other words, who gives a shit?

While the words brace yourselves used in preparation for the recorded sounds of a creature I hear every day did sort of make me laugh for a brief moment, it also caused me to tear off my headphones and take a moment to consider my own less than savory encounters with other commonly known bird species: 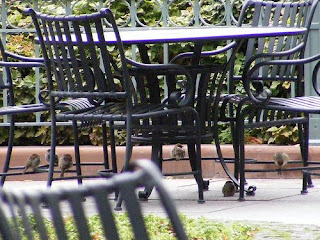 The Crumb Crested Fry Pecker
Natural Habitat: Outdoor cafes and open air restaurants, the occasional movie theater or mall.
Diet: Whatever can be scrounged from what you've dropped on the ground or sneaked off from your plate while you are not looking. 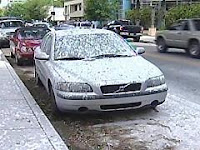 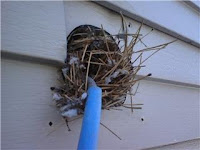 The Rat Fucking Squatter
Natural Habitat - Dryer vents.
Diet - I don't know - but whatever they are shitting into the dryer vent makes the house smell like the gibbon cage at the zoo.
Posted by The Lady Who Doesn't Lunch: at 5:35 PM

Labels: calm down bird guy it's a fucking cardinal, lady hates birds, rats with wings, this is my bird post

I think you have a new career as a bird expert...I have seen these species of birds.

We have "look out it's flying right at you" sparrows around here. These things are like the suicide bombers s of the bird world.

I was once attacked by a number of small birds who beat me with their little wings. I'm not kidding. It was a bad day.

A gaggle of Car Shitting Fuck Knuckles destroyed the interior of my convertible once. I've had the it hand-detailed twice and that shit won't come off in some places. The same night someone stole the instruction manual for my car out of the glove box. I didn't lock it because, really, who steals a fucking instruction manual?!? A dipshit who can't likely read, that's who.

Oh Lady, you've got me riled up now. Look out.

Oh my god Lady, you made me laugh so much with this post! Did you see the Discovery channel piece that talked about the Bluebird of happiness narrated by Sigorney Weaver? Great stuff, the male bird prepares a little dance floor for hours, calling a female to come watch him dance and chirp.

Then the female flys away, and Sigorney's narration said "...and she was largely unimpressed"

Evil - I'm actually frightened out of my mind by birds and those dive bombers have given me apoplexy on several occasions.

Wendyb - I'm so sorry about this - are you sure they weren't just trying to help you put on your apron like in Cinderella?

Gwen - It's the Elmer's glue in their diet that keeps the shit sticking for decades. Little bastards. Calm down Gwennie - get a drink.

Skydad - Oh yeah! Always happy to make people laugh and in your case I am simply returning the favor.
Anyhoo.. You bet I saw the Planet Earth series in stunning high definition - and the beautiful blue birdie was facinating to watch, except apparently to the female blue birdie.

I cannot stop laughing. FUCK. This is way funnier than anything I have ever posted on my blog ever. In the history of ever. I may just have to rename my blog after seeing this post. Or add the addendum (except for Gifts from a Broad). Shit.

I'm gonna go read it again and laugh like I've never read it before. It's always better the second time around because then you know when the good parts are coming up.

God I need a life.

HAHAHAH, thank you SO much for my big laugh. I loved this post.

The Car Shitting Fuck Knuckle appears to be a protected species around here. This was hilarious. I like birds, but my sister HATES them; she reacts to a bird flying nearby the way I would react to a snake sliding up my leg. Serious bird phobia.

I am freaked out by birds...nice from a distance but not up close! And I agree that we might need to change the diet for the Car Knuckles (at work so can't write the real name)! Yucky birds!

I never really hated birds until I moved to NYC. The car-sized pigeons constantly try to engage me in games of chicken when I'm just strolling down the sidewalk. Bastards.

Too funny. I like birds in general, but I know exactly what you mean. I've been attacked by ravens before when i was running and it was scary as hell.

I'm not making this up. If you look in a bird book, they actually describe particular calls like: The cardinal says: whipa tee-tee, whipa tee tee tee. Swear to God.

My cat loves birds. She thinks they're delicious. ;)

I don't like most birds. When I go into the pet store, their chirping drives me insane. I owned a few parakeets once but you can't cuddle birds.

Love to see eagles, and the red cardinal on a snowy branch is beautiful, though.

Now that's some funny shit Lady..
Wendyb..I promise that I did NOT mean to laugh so loud at you story that I had to cover my mouth and scream....feeling shamed now, thanks..oh but wait, churlita, beckeye and dr zibbs did NOTHING to help my mouth grabbing situation.

The only bird I like is chicken. Preferably fried. Amen.

i hate birds. one time a bird swooped down and took a bite out of my friend's sandwich when it was right in his hand! that's theft!

I hate the phrase 'brace yourself', because it's usually followed by "...I'm going in dry because there's no lube."

Ugh, I've got nothing against birds but if I was listening to that show I think I'd change my mind...

ahh you made me spit milk onto my computer!!!

Like Suze said...the only bird I like is chicken, fried and right next to my mashed potatoes! Okay, turkey is fine, too.

That was funny, right there. And Skylarspappy's 'Largely Unimpressed'... I have to use that in a conversation. I will be looking for just the right place to fling out that juicy tidbit.

holy shit, this post was genius. fuck knuckles had me laughing for a long time. Cardinals are pretty though..

ok, sorry, I just punched myself in the face for you