Bringing Home the Bacon, Smacking You With the Pan 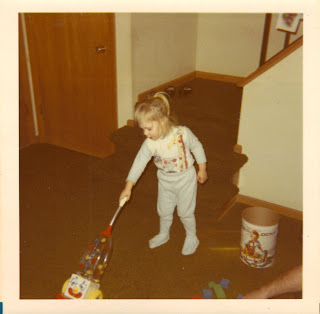 I temporarily dropped off the face of the earth, blog wise, while I have been adjusting to my new lifestyle juggling dual careers as a full time cubicle dweller and full time nurse maid for a perfectly competent and healthy 44 year old man.

My husband has become quite spoiled over these past several months of my unemployment, during which time I willingly chose to take over all of the household chores as a trade off to not contributing to the family coffers. As a result, now that I have rejoined the workforce my darling has apparently forgotten the meaning of the key words from our marriage vows "equal partnership". His memory has also slipped about such things as how to unload the dishwasher, run the sweeper, and scoop the litter box.
I reached the end of my rope as well as the end of my nursemaid career last night when he put an empty soda can on the counter directly above the recycle bin. Then he neatly wrapped the last slice of pizza in aluminum foil, placed it gently into the refrigerator, and walked away. Leaving the empty, opened pizza box on the kitchen counter and went to bed.
I'm not a very confrontational kind of person, especially when I'm angry. I'm more of a stew for awhile and think things over so that I don't say something that I regret later kind of a person. So even though I wanted to shove the pizza box and soda can up his ass, I left them where they were and went to bed too.

Saturday afternoon I asked him to sweep the living room, den and dining room. It is now Thursday and he hasn't even asked me where the vacuum cleaner is. 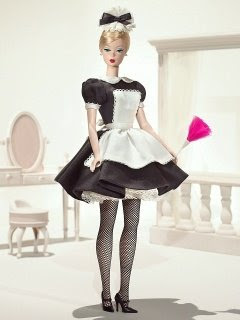 And my mother's fault, and her mother's fault and every woman before us. I was raised to mollycoddle men, to cook and clean for them without complaint. I'm a housewife at heart. I actually LIKE doing most of this stuff, but a lady gets tired of doing it all - ALL THE TIME.
After I hit the publish button here, I'm making a chore list.

Let's just see how that flies.
Picture at top: See what I mean??? A toy vacuum cleaner at age 3. I also had a toy iron, toy mops and brooms, toy pots and pans and look at me now. I'm like fuckin' Hazel over here. If Hazel were a housekeeper AND on a data management project team.
Posted by The Lady Who Doesn't Lunch: at 6:51 PM

Labels: angry beyatch, blonde and sweet, crying in the rain

I'm famously a lazy bitch who won't stop to pick up something I drop on the floor (if it's food --well, duh, that's why I have dogs), forget vacuum. This forces the other people in my life to compensate or live in filth. And I don't mind living in filth, so whatevs!

I was laughing my ass off through that entire post, reading parts of it aloud to my husband who, surprisingly, was not laughing as hard as I was. Although, to be fair, I don't know where the main water turnoff is...ok, I do, but I am sooo not going under the house. I will drown before I crawl into that spidery hell.

Well said Hazel...love that part! I admire your ability to not shove the pizza box and pop can up his ass, because that would have been exactly what I would have done. Have I mentioned that I live alone.

I used to love watching Hazel. I realize that's not the point of your post at all, but thanks for the memories.

The first time my ex husband met one of our neighbors, she thought he was gay. He was dressed to go play golf but decided to vacuum (which was a first) before he left so when she knocked on our door, there he was vacuuming in a sweater vest. This also is not the point of your post.

I'm with rcubed....I'm not crawling under my house for any reason either. But I live alone and rent so that's what the landlord is for.

Welcome back! Missed you. Can't wait to hear more about the job.

I love how you use the term sweeper. My Grandma always said that. Do you also say pocketbook and ice box like she did?

I always wind up doing things myself because P never seems to get to it. I'm sure it's all in his master plan. He knows if he stalls long enough I'm going to do it. But he is very good at doing housework so that statement applies to anything I ask him to do besides housework.

My otherwise lovely husband has a habit of dropping his dirty dishes into the sink, 3 inches from the dishwasher, and just walking away. On the other hand, when we had our townhouse, we thought that we had mice in the basement, and a coworker asked me what I did about it...I told her "I got married...that's what I did about it". Generally, housework is my job, and rodents and fixing stuff is his job...but again, the dishwasher is 3 frickin' inches away from the frickin' sink.

I don't know what mollycoddle is, but it sounds hot and I want some!

By the way, my grandma would always say Hover the rug instead of vacuum or sweep.

My husband will take out the trash but he REFUSES to put a new bag in there, he claims it's "my job"...
Sadly, it also seems to be my job to both clean AND fix shit in my house..he didn't start out that way..like she said, it's MY fault.

OMG. This is like deja vu, Lady, deja vu! I am constantly speechless at the things men leave lying around when they could just as easily dispose of them. Then I feel like I've turned into my mum.

im the housewife of my apartment, so i know where you're coming from. i could probably dump alternating buckets of spaghetti sauce and dog shit right on my roommate and he'd probably go to class like that. stupid jerk. and THEN he'd find a way to get that mess on me, cuz that's just how he is. and then i'd clean it up.

I mow the yard and shovel the snow, my wife does the dishes. I do the laundry and clean the bathtub, my wife vacuums. The rest of the stuff we trade off on.

It works. Kind of.

There's always someone what thinks they got the wrong end of the stick.

Maybe that's why I don't like to vacuum to this day, because I never had a toy vacuum cleaner when I was a kid! It's just a theory. ;)

Ha ha...I'm an office manager and there are plenty of people here who can't seem to find the garbage cans, recycle bins or dishwasher either. I've seen many an empty pop can sitting right above the recycle bin as well.

WendyB - I don't mind some degree of filth, but we vowed equal partnership so he should put his cans in the recycle bin like I do.

Rcubed - my husband mows the grass in our back yard and takes the trash to the street. I wouldn't like to do either of those things, but I'd be willing to trade once in awhile if he'd clean a toilet or two.

RWoman - I lived alone for a very long time which is probably why I get a little crazy about the no-brainer cleaning skills like flicking the can into the recycling bin literally inches away.

Sauntering Soul - hey! Welcome to my blog! That is hilarious about your neighbor and your ex. I've never seen my husband in a sweater vest, but I thought he was gay the first time I met him (he has a quality).

Gwen - thanks! You know things are going so good I don't have much to blog about workwise.

Heidi - I haven't been this peevish about his lack of housework skill since the week we first moved in together.

Del-V - fluids are very important and you need to stay well hydrated since you are working so hard ;)

Rak - I LOVE to blame my mother for everything and why shouldn't I? It's all her fault.

SRU - I didn't realize that "sweeper" was a regional thing. Or maybe it's another hillbilly thing like saying "supper" instead of lunch.

CDP - Good one!! My darling is the primary mouse carcass remover around here, but the last time we had a mouse carcass he wasn't home so I had to dispose of it myself. I still haven't recovered.

Linka - I HEAR that totally. And then I go to throw something in the trash, ususally something WET like coffee grounds and realize there is no liner and I want to run out and buy a hand gun, throw the can through the wall, or use his pillow case for the liner.

Guv - I hate getting angry about little things like soda cans, but they add up over time and I think my head might explode.

Player - your room mate is a tool and you are a darling.

You and I could be all house wifey together. You wash and I'll dry and put away.

Chris - when we first moved in together things were pretty fair, but over time the see saw has dropped me on my ass and I pretty much do it all. He used to do things when I asked him, but now he doesn't even do that.

Tara - I had so much toy housekeeping crap I could probably have moved out and lived on my own in a little tiny house.

Beckeye - it may actually be worse to have to clean up after people you aren't even related to.

Sometimes you have to break a bone to have it set properly. Good luck.

I think that next to separate TVs, the single greatest problem in relationships is the division of labor. And like every man, I am completely guilty of this. To be fair, picking up my trash is better than having to listen to me talk.